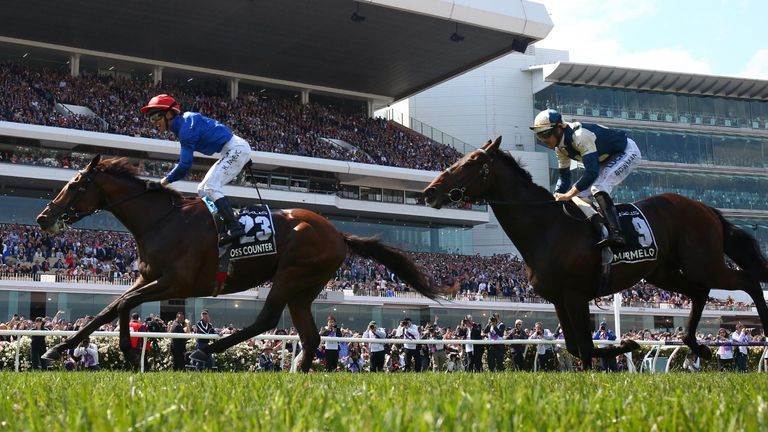 Cross Counter secured his place in the record books as he became the first British-trained winner of the Lexus Melbourne Cup at Flemington.

Trained by Charlie Appleby and ridden by Kerrin McEvoy, Cross Counter swooped late to grab the Group One prize in the famous blue silks of owners Godolphin.

Fellow British runners Marmelo and Prince Of Arran secured the minor honours in a clean sweep for the raiding party.

Runaway set the early pace in the two-mile contest, with McEvoy content to sit towards the rear of the field and he had only a handful of horses behind him turning for home.

He had to switch wide to launch his challenge in the straight, with the Charlie Fellows-trained Prince Of Arran having set sail for home.

However, Cross Counter was flying in the final furlong and while Marmelo also tried to produce a winning sprint, he had no reply to McEvoy’s mount.

The Aidan O’Brien-trained Rostropovich finished fifth, but fellow Ballydoyle inmate Cliffs Of Moher sadly broke down passing the post for the first time.

McEvoy said: “What a thrill – to do it for Sheikh Mohammed and Charlie Appleby. Obviously Godolphin has been a huge supporter of mine. Well done to Charlie and this little horse.

“I was back a little bit further than I wanted, I knew I was full of running and at the furlong I thought ‘is this happening again?’. I’m just lucky I can ride light and he’s been unbelievably well prepared by Charlie Appleby.”

Appleby has enjoyed a stellar year with Masar also winning the Derby at Epsom back in June.

He said: “It’s a very special day for us all.

“For me it’s obviously very special to be here, but for the team, it’s just fantastic. I’ve spoken to His Highness (Sheikh Mohammed) and he’s over the moon about this result – it’s a challenge that’s been a long road.

“I can’t thank everyone enough. It’s a day I will never forget. It’s been a very memorable day.”