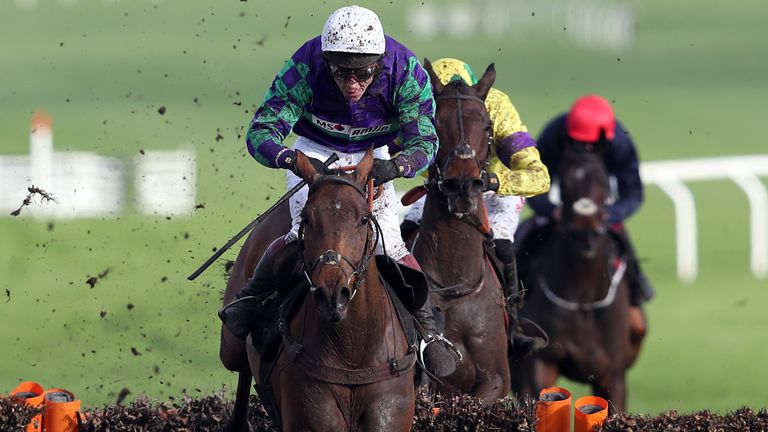 Every generation greets new Cheltenham Festival heroes, horses that are talked about for many years after they have strained every sinew, tramping up that challenging climb to the winning line.

There are several 21st-century champions that still draw gasps of admiration, including Francois Doumen’s splendid stayer Barracouda (2002 and 2003), Inglis Drever (2005, 2007, and 2008) and the incomparable Big Buck’s who dominated the race for four consecutive years from 2009 to 2012.

The Paddy Power Stayers’ Hurdle has undergone many reincarnations since it was first run in 1912 when drearily called the “Stayers’ Selling Hurdle”. The winner was sold for £50 after the race; this year’s winner will most certainly be held in higher regard!

Here are my profiles of this year’s contenders:

Beacon Edge will be making his Cheltenham debut. He has yet to win at Grade 1 level but went close when three-quarter-length third to Honeysuckle in the Hatton’s Grace Hurdle at Fairyhouse. Got up on the line to beat Fury Road in Navan’s Boyne Hurdle over two miles five furlongs – the furthest he has raced so far. There must be nagging stamina doubts in such a gruelling event.

Bought for 6,000 euros as a foal, Flooring Porter has exceeded all expectations graduating from handicap company to winning the Grade 1 Christmas Hurdle at Leopardstown, when making all the running to repel all challengers, including The Storyteller (2nd), Sire Du Berlais (3rd) and Fury Road (4th). Frontrunners have proved vulnerable in the Stayers’ Hurdle, but there are always exceptions – Lil Rockerfeller raced prominently only to be collared close home by Nichols Canyon in 2017. He looks the pick of the Irish raiders; this will be his first race away from home territory.

Started 13/8 favourite for Leopardstown’s Christmas Hurdle but finished behind Flooring Porter, The Storyteller and Sire Du Berlais. Also favourite for his latest outing in Navan’s Boyne Hurdle, he tried to make all, failing by a neck when headed on the line by Beacon Edge. He finished third in last year’s Albert Bartlett Novices’ Hurdle (one-and-a-half lengths ahead of Thyme Hill) but may struggle to confirm that form.

A surprise 50/1 winner in 2020, produced his best piece of form since last year’s victory when chasing home Third Wind in the Grade 2 Rendlesham Hurdle at Haydock in February. It was his first run since undergoing wind surgery in December. His early-season performances were most disappointing but with that resurgence of form, he looks an each-way player.

McFabulous was a slow burner in his early days over hurdles, not making his mark until tackling distances in excess of two miles. However, there is no conclusive evidence yet that he truly stays three miles. He has only raced once at the trip when made 15/8 favourite to beat Paisley Park and Thyme Hill in the Grade 2 Long Distance Hurdle at Newbury in November. He was readily outstayed by both rivals and his participation at Cheltenham must be in doubt following a defeat in the National Spirit Hurdle at Fontwell.

Paisley Park was considered one of the ‘bankers’ at the 2020 Festival but after what appeared to be a perfect preparation failed to deliver, trailing in 14-and-a-half lengths behind Lisnagar Oscar. Known for hitting his customary ‘flat spot,’ on this occasion he failed to pick up on the tacky ground (he also lost two shoes). This season he has had two classic encounters with Thyme Hill – the score is one apiece, although at Newbury in November he conceded 3lbs to the winner before gaining revenge in a memorable renewal of the Grade 1 Long Walk Hurdle at Ascot. Between the final two flights Paisley Park had five lengths to make up on Thyme Hill and Roksana, but finding a full head of steam on the run-in surged to victory. It was plain to see the ‘real’ Paisley Park was back showing all his gritty determination. Quite rightly, he will have plenty of support to regain his Stayers’ crown.

Not many mares contest the Stayers’ Hurdle and only two have succeeded (Rose Ravine 1985 and Shuil Ar Agaidh 1993). This will Roksana’s third appearance at the Festival; she won the Grade 1 Mares’ Hurdle in 2019 and finished a creditable fourth to Honeysuckle in the same event last year. She has been in top form this season, beating Magic of Light in a Grade 2 event at Ascot by 8 lengths. Roksana still has around two lengths to make up on both Paisley Park and Thyme Hill – beating one of the pair is possible but conquering both plus the Irish raiders maybe a step too far. Another tilt at the Mares’ Hurdle is her most likely option.

Sire Du Berlais has already stamped himself a Cheltenham hero by winning the last two runnings of the Pertemps Network Final Handicap Hurdle at the Festival. However, stepping from top handicap company to a championship Grade 1 requires a fair level of improvement. Sire Du Berlais is certainly a tough customer; carrying 7lbs more than in 2019, he conceded weight all round last year in one of the most competitive handicaps of the season (The Storyteller was a half-length runner-up, receiving 3lbs) At face value he looks to be up against it, reversing Leopardstown Christmas Hurdle form with Flooring Porter and his stablemate The Storyteller but winning Cheltenham Festival form counts for plenty.

The plan is to run in the Stayers’ Hurdle before heading to the Grand National at Aintree. The Storyteller has been in excellent form this season winning a Grade 1 chase at Down Royal in October, and finishing strongly to take second place, six lengths behind Flooring Porter in the Christmas Hurdle at Leopardstown. Age is against this consistent veteran; the only Stayers’ winner in double digits was Crimson Embers (1986) when a sprightly 11-year-old.

Thyme Hill has won four of his six races over hurdles, including the 2019 Grade 1 Challow Novices’ Hurdle. Unbeaten in three hurdles prior to the Albert Bartlett Novices’Hurdle, Thyme Hill was sent off 4/1 favourite. In a pulsating finish, four horses jumped the final flight virtually in line. Slightly impeded before and after the last, he stayed on willingly in fourth place, one-and-a-half lengths behind the winner Monkfish. Philip Hobbs’s hurdler has hardly put a foot wrong this season and appears an improved performer, beating Paisley Park at Newbury (receiving 3lbs) before being ‘mugged’ on the line in a revenge match at Ascot in the Long Walk Hurdle. Their much-anticipated clash at Cheltenham will surely be a close call – possibly Thyme Hill, two years younger than Paisley Park, may have the edge but it could be a classic case of ‘who turns up on the day’.

Best of the rest

Several entrants have alternative engagement, the most-high profile of these are Champ and Kemboy. CHAMP looks likely to take his chance in the Gold Cup after staging a superb reappearance at Newbury. KEMBOY hasn’t had much joy over the Cheltenham fences and may head to Aintree. BACARDYS was third last year and fifth in 2019, and makes his sixth Festival appearance in search of his first victory. Willie Mullins also has BACHASSON entered but he has made little impact in his three Festivals. Regular participant LIL ROCKERFELLER (2nd in 2017) has been thriving this winter and may take his chance. Kim Bailey’s VINNDICATION (also entered Gold Cup) hasn’t raced since unseating in the Ladbrokes Trophy. He’s unbeaten in three hurdles but hasn’t raced over timber since his novice season in 2017/18.

Philip Hobbs’s THYME HILL fills the profile of a young horse going places. He ran a great race in last year’s Albert Bartlett Novices’ Hurdle and has improvement curve continues upwards. He appeared to have the measure of Paisley Park in a memorable Long Walk Hurdle, until pipped on the post. Paisley Park is bound to hit that ‘flat spot’ and stay on up the hill but I’m not sure if he can get lucky again to beat Thyme Hill. Flooring Porter looks the pick of the Irish raiders and proved ultra-consistent at the highest level.