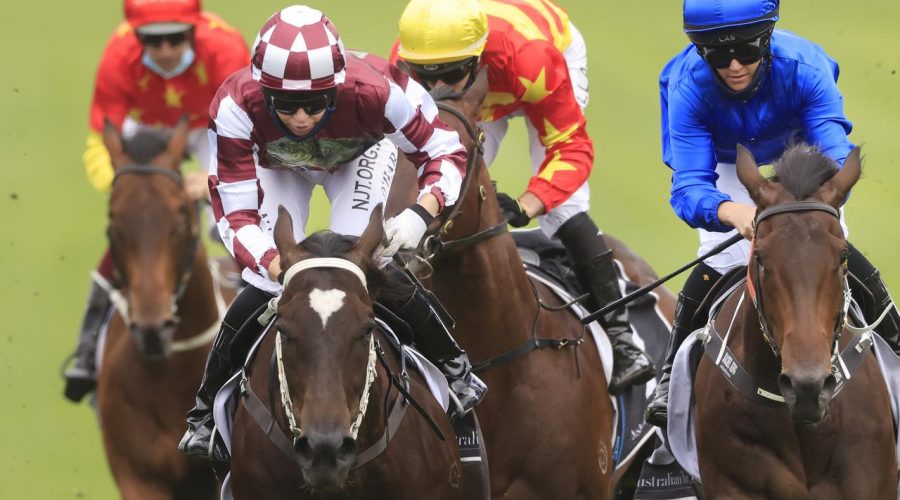 Scott Spackman has known Rocket Tiger was above average for a few months now but the punters have never given him a hope.

He won on debut at Canberra in December as a drifting $16 chance then took out a Saturday two-year-old race in Sydney as a $26 hope.

He was a little more respected last start in the Group 2 Silver Slipper as a $16 chance behind Home Affairs when getting little luck in the straight. He should start at single-figure odds for the first time in Canberra’s $250,000 Group 3 Black Opal Stakes (1200m).

Rocket Tiger will have plenty of admirers in the Black Opal Stakes. Picture: Getty ImagesSource:Getty Images

Looking at what Rocket Tiger’s done on the track alone, he should be a shorter price on Sunday but being trained out of Wagga Wagga and not Rosehill or Randwick plays a role in his price.

“It’s because of me, I know that, I’m not stupid,” Spackman said.

And if he wins the Black Opal, Rocket Tiger will ensure Spackman is rubbing shoulders with the big guns in the Golden Slipper in a fortnight at Rosehill.

“It would be massive,” Spackman said. “It’s been a massive ride already. I just can’t believe this is happening to me.

“This is what racing is all about and this is why we’re in it but you don’t think it’s going to happen to you. I was only thinking the Black Opal and Wellington Boot but he’s exceeded those expectations.”

Spackman knew the Cluster two-year-old had promise but didn’t want to let the cat of the bag too early for a few reasons.

“I had a rough idea (how good he was) but I didn’t want to say too much and jinx myself,” he said. “I didn’t want to tell many people because if you say it’s good they get ideas and you might get people telling them to send the horse to someone else.

“I told them what I thought before the first start, though, then it was their (owners) choice to go to Randwick.”

Rocket Tiger has done well since copping interference in the Sliver Slipper, where he was rattling home late, and Kathy O’Hara teams up with him again from barrier one, which Spackman was looking for.

“He’s improved again since that run,” Spackman said. “I’ve got no doubt in my mind that he should have won the Sliver Slipper. It was a dirty race.

“He obviously had to bump his way out and he bumped his way out then he decided he had to bump that horse again but once he balanced up and got going, he was taking some ground off Home Affairs.”

The good thing about racing is that reputations go out the window once the barriers open and the animals take over. “It doesn’t matter once they jump and this horse doesn’t know who the other horses are and he doesn’t care who they are,” Spackman said.

Trainer Scott Spackman is hoping Rocket Tiger can secure a spot in the Golden Slipper with victory in the Black Opal Stakes. Picture: Getty ImagesSource:Getty Images

Local who has done more than enough in her trials to suggest above-average talent.

Super impressive winning here on debut and ran well in a deep race first-up at Wagga.

Always been a handy type; down in class from a creditable run against Harmony Rose in town.

Quiet Riot won on debut and was last seen finishing fourth of five runners at Canterbury on Valentine’s Day in 2020. Pardon the pun, but you had to ‘love’ his last trial. Market moves essential viewing. Revitup Rednut is the one who will be coming home hard here. Locals Major Time and Wilful Soul are players.

Lady Of Luxury is two things; unlucky and costly! She was beaten at $1.30 last start at Wyong but go back before then and she should have won, or placed in town, and opened 2021 with a second in the $250,000 Magic Millions Maiden. Last chance. Lord Desanimaux has lost 25 of 26 but he has placed 13 times, 10 of them ‘seconds’. Foxtrot Bravo has claims.

Perfect Pitch has won close to $250,000 and has run well in much better company than this dating back to her days with Gary Portelli. Fast forward to the present and the now Canberra local is down in class/grade having run against Harmony Rose last time out. Zardoro, the horse who ran in 19 Highways, always runs well. Lunar Rain may ‘sprint’ well here.

Glamour Runs Deep has trialled like a good horse. Matthew Dale had found a race at her home for the debut and ticked the jockey box by booking Blaike McDougall, who rode her in the last trial. Taylor Be Swift has trialled super since her uncustomary poor showing at Wagga. Spicy Restaurant was fourth to The Bopper in the big Scone race,

Black Magnum excels at 1000m and wasn’t too shabby at 1100m either first-up when he was a distant second to Emanate from barrier 11 of 11 at Rosehill. Drawn barrier one this time! Tasmanian-bred gelding Cradle Mountain was a fair way behind Black Magnum that day but he is ‘one for one’ here. Wayupinthesky is a classy mare on her day.

Brave Song is a stakes-winner in two states. Scratched from Friday’s Newcastle Newmarket to run here from the ace draw. Kosciuszko winner Handle The Truth hasn’t won since taking out the 1000m sprint on this day last year; he is also a killer horse second-up! Poetic Charmer, Academy go in.

Solar Winds is a $900,000 yearling from Team Hawkes’ yard on debut but with huge talent. Scratched from the Todamn Stakes on Saturday. Poker Dice is the value runner. The Keith Dryden-trained gelding was cuddled big time in his trial here! Snowden pair Construct and Kalashnikov are both good enough to play a role. Ditto for Miss Ostend.

To The Nines is part-owned by that great ‘number nine’ himself, Nick Farr-Jones and showed David Campese-like acceleration to win here on debut. Nothing wrong with the first-up run at Wagga in a good field. Shamus Dream is a Jason Coyle trained mare who has done enough to warrant close consideration. London Gal is a fast filly with Blaike McDougall on for a third time.

BET: TO THE NINES win.