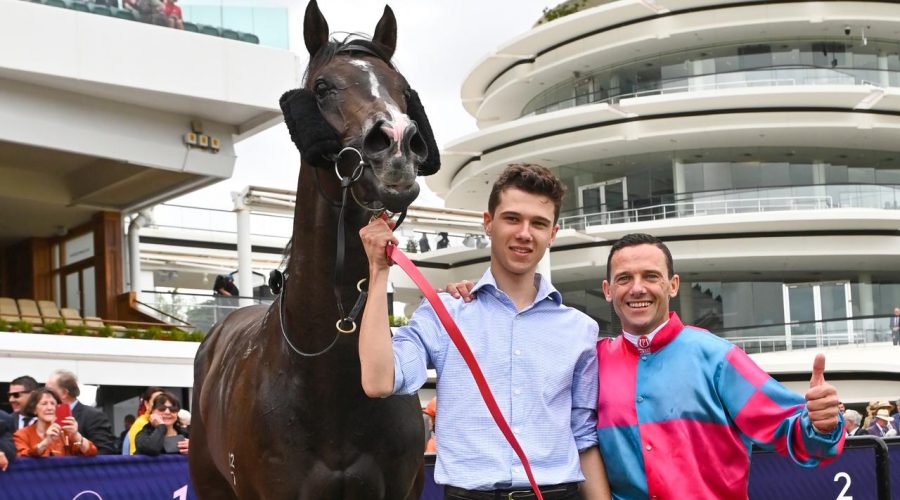 After balancing the highs and reality of racing carefully in the home, on purpose to deter son Thomas from considering the caper, the Melbourne Cup winner maybe got comfortable.

Contrary to his pedigree, Thomas, now 19, the son of Prebble and wife Maree, the third eldest of Ballarat‘s famous Payne dynasty, showed next to no interest in race riding until last year.

Despite the obvious reservations, “not many parents want their kids to go to work and have an ambulance following them around every day”, Prebble is thrilled to share the craft with Thomas.

“I pushed him away (from race riding) long enough, I deterred him enough,” Prebble said, ahead of his own comeback on Tuesday after six months out of the saddle.

“It’s not the most pleasant industry if you’re not top shelf, it’s really hard.

“It’s a grind and there’s a lot of downs … the ups are high, very high, but there’s times where you do think why are you doing it?

“I don‘t know, somehow he got an inkling he wanted to be an apprentice jockey and I said ‘don’t be silly mate’, he really hadn’t ridden a horse until he was 18.

“It was a big surprise, I must say, obviously I took a step away, but it‘s quite enjoyable spending this quality time with him.”

Thomas is working as a track rider for champion trainer Peter Moody at Pakenham six days a week, in a bid to qualify for Racing Victoria’s acclaimed apprentice jockey school later in the year.

“He comes down with me and has four or five trials for Paul,” Prebble said.

“Gets some experience under his belt and under my watchful eye a little bit, which I‘m thoroughly enjoying.

“He’s my best mate, if I can advise him and give him some guidance, it’s very rewarding.”

Thomas, who stands at about 170cm and 53 kilograms, said people asking him whether he would enter the family business, as such, was a factor in the switch from real estate to riding.

“I’m not sure, to be honest, living in Hong Kong I didn’t have the opportunity to ride track work so I didn’t think about it,” Thomas said.

“I came back and did my last two years of schooling I had a lot of people asking me ‘are you going to ride’ and I never put much thought into it, so I thought ‘why not, I’ll do it’.”

As much as father and son have revelled in the experience to date, if and when they do meet under race conditions there will be no favours given.

“No chance, I’ll be beating him 100 per cent, with a big smile on my face, hopefully, going past him,” Thomas said.

Prebble, who last rode in October, took time off to recharge and rehabilitate a neck and shoulder issue.

“I’ve definitely got the fire back in my belly,” Prebble said.

“Feel like a 15 year-old kid actually about to go out and have my first race ride.

“I haven’t felt like that for a long time, so it’s a nice feeling.”