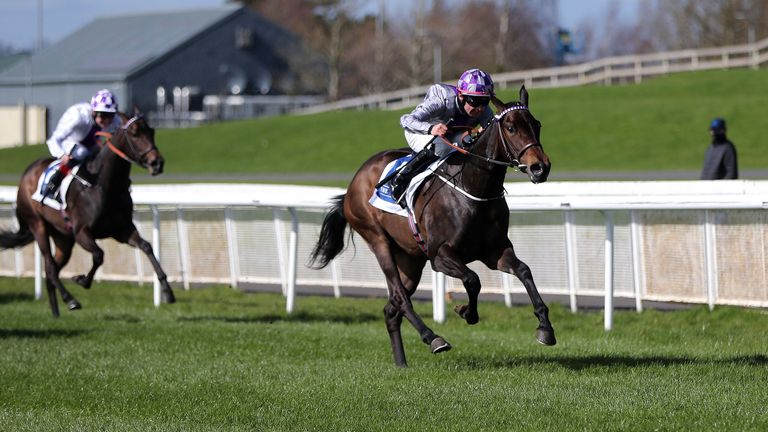 Just two days after the Cheltenham Festival came to a close, a field of eight unraced juveniles went to post for the first race of the Irish Flat turf season – a race Bolger has won on several occasions in recent years.

A smart start allowed the latter to grab an early lead and the further the daughter of Vocalised went the better she looked – passing the post with almost five lengths in hand over It’ll Do My Day, with Freedom Of Speech a creditable third.

Bolger was represented by his daughter, Una Manning, who said: “I just spoke to him there now and he said she has the makings of a very nice filly.

“She has a big future. She did it very well, she handled the ground well and did it like a pro.

“He thought that whichever one of them handled the ground best, that was hard to know in advance, obviously, and she just seemed to handle it a bit better than the other filly.

“She’s something to look forward to and it’s great to be back racing.”

Joan Of Arc gave Aidan O’Brien an early first winner of the campaign when landing the odds in the Big Picture Communications Fillies & Mares Maiden.

The 4-6 favourite was a workmanlike scorer as she took the seven-furlong contest by a length and a quarter from 80-1 newcomer Approach The Dawn in the hands of Ryan Moore.

Joan Of Arc, who finished second on her debut at Dundalk in November, is impeccably-bred being a sister to Group One winners Gleneagles, Marvellous and Happily.

O’Brien is thinking of running her in a Classic trial at Leopardstown next.

“You’d be delighted with her. Ryan said she’d be happier on nicer ground and won’t mind going up to a mile either,” said the Ballydoyle handler.

“We might have a look at the Guineas trial at Leopardstown for her.

“It’s tough going out there first time. He said he was very comfortable on her.”

Willie McCreery’s nine-year-old knuckled down well for 5lb claimer Nathan Crosse to hit the front in the closing stages of the five-furlong dash.

Downforce (11-1) collared Indigo Balance, who ploughed a lone furrow on the far side of the course in the final half-furlong, to score by two and three-quarter lengths. Ecclesiastical was a head away fourth.

McCreery was also represented by seventh-placed Gobi Desert and said: “It must be tacky enough. I thought all week that it was drying out too much for the two of them, but Nathan said he loved it.

“He jumped out, barrelled along the whole way, and enjoyed himself.

“We’ll go back down to Cork in two weeks for the Listed race that he has won twice.

“It’s great to see him back. He didn’t win a race last year, but was third in a Listed race towards the end of last year and is a good little money earner for Donal Finnan so I’m delighted.”

March 21, 2021 Horse Racing Comments Off on Bolger off to flying start at the Curragh
NFL News