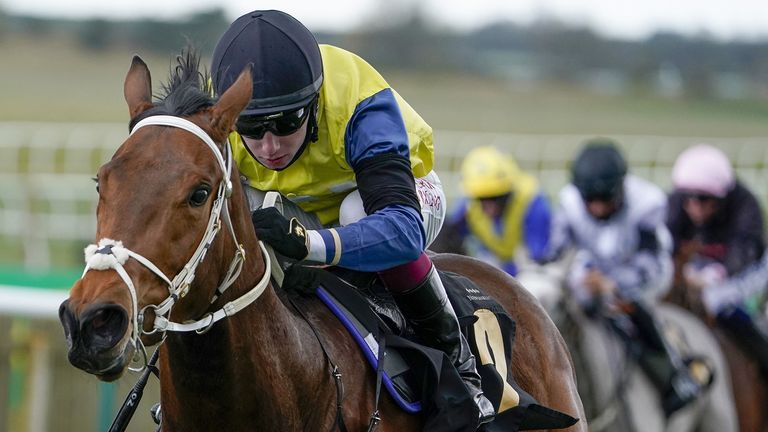 Bellosa looked a filly with a real future as she proved the market right in the Rossdales Maiden Fillies’ Stakes at Newmarket.

Champion jockey Oisin Murphy was booked by Jane Chapple-Hyam and from an opening price of 25-1 the daughter of Awtaad went off the 7-2 joint-favourite.

Bounced out on the rail, she never saw another rival and made every yard for a seven-length win from the 40-1 shot Verreaux Eagle.

CHapple-Hyam was did stress, however, that rumours the three-year-old had been working with her Classic hopeful Saffron Beach, who was second in Wednesday’s Nell Gwyn, were wide of the mark.

“She’s a nice filly, she came to me after Christmas. Sir Edmund Loder (owner) sold his stud in Ireland and had a dispersal sale, but I was very fortunate to get to train this filly,” said Chapple-Hyam.

“She jumps keep improving with all her work and I’m thrilled with how she’s done it today. I didn’t expect that, though!

“I wanted her to hit the line strong, but she was conceding experience so that just shows her class.

“She worked with Ambassadorial, a good servant of mine, and went by him so I knew then we had a good one. I have to thank Adam Kirby because he rides her and likes her a lot as well.

“She has never worked with Saffron Beach, though, I don’t know where that rumour came from!”

She added: “I think we’ll look for a Listed race next, over six or seven furlongs, but I’ll talk to Sir Edmund (who owned the Marling). There are Listed races at Lingfield and Nottingham we could look at.

“I’m sure the lads had a nibble, they all look pretty happy so I’d say yes!”

Creative Force had not been seen since disappointing in the Coventry Stakes, but if he could reproduce the form of his debut win a mark of 89 in the six-furlong Each Way Extra At bet365 Handicap was always going to prove lenient.

Briefly it looked as if long-time leader Significantly had slipped the field, but going into the dip Creative Force picked up and sprouted wings, the 11-4 favourite going away to win by a length and three-quarters.

“He had a bit of a setback after the Coventry and as we all know getting them to Ascot can be tough on the two-year-olds,” said trainer Charlie Appleby.

“He’s a genuine little horse. He broke his maiden at this meeting last year and while he hasn’t grown he’s strengthened up. He could get seven as well.

“Whether he’s good enough for something like the Pavilion Stakes we’ll see. He could step up to seven in time.”

John Gosden’s Peter The Great was an 11-1 winner of the Bet365 Wood Ditton under Nicky Mackay.

Gosden said: “Nothing in the Wood Ditton is ever a surprise.

“He’d been working nicely at home, but he has a wild side to him so I thought Nicky, who rides him at home, can ride and we’ll leave the veteran (Frankie Dettori) in the weighing room.

“We’ll go for novice over 10 furlongs next. That’s the great thing about those races, as when you won this in the past you were almost forced to go into a Listed.

“Because of the racing through the winter now you tend not to get 20 roaring bulls in this.