Favourite Wild Illusion was narrowly edged out by Sistercharlie in the Breeders’ Cup Filly & Mare Turf on Saturday night but trainer Charlie Appleby could still reflect on a big Breeders’ Cup and an even bigger season for the filly’s Godolphin owners.

Sheik Mohammed’s elite operation still had Saeed Bin Suroor’s Thunder Snow to run in the feature $6m Classic before he and Appleby flew to Australia to saddle runners in Tuesday’s Melbourne Cup.

But with the win of Best of Days overnight in Australia taking the global total to 29 group one wins for Godolphin in 2018, the best of days are really back for the Sheik’s team. 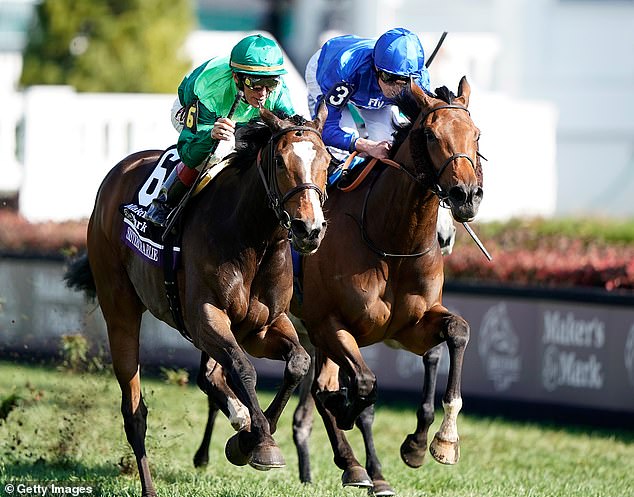 ohn Velazquez, aboard Sistercharlie, races to victory over Wild Illusion on Saturday

The recent years in the racing wilderness are a fading memory after a re-organisation and refocussing plan which is delivering.

Godolphin have won some big races this year including the Derby with Masar. But arguably as significant was the win of William Buick-ridden Line of Duty in Frday’s $1m Juvenile Turf.

His win in a race Masar ran in last year also gave Appleby a remarkable three Breeders’ Cup winners from only six runners.

It was also a result arising out of the decision of Sheik Mohammed to stop boycotting the sires of the rival Coolmore Stud.

That was a major contributing factor to Godolphin’s barren years but that rift ended last autumn when the Sheik again started buying yearlings bred by his big rival on the track after a 12-year gap.

Line of Duty, a son of Coolmore super sire Galileo whose dam Jacqueline Quest was disqualified after passing the post first in the 2010 1,000 Guineas when trained by the late Sir Henry Cecil, cost 400,000gns and is the most significant of the Sheik’s Coolmore-related purchases since his change of policy.

Hugh Anderson, chief executive of Godolphin UK, said: ‘Line of Duty is an example of the change in policy we have had this year and the most significant.

‘The success this year is what we should be aiming for. There are 29 Group Ones but within them some really good group ones. We had a fantastic Arc day and have won races like the Dubai World Cup, Epsom Derby, National Stakes and here at the Breeders’ Cup.’

Line of Duty now looks a Derby candidate. Aidan O’Brien never tires of relating the fighting spirit that super sire Galileo has embued in some of his best stock and the Godolphin colt seems to have inherited that resilience.

Appleby said: ‘I am very fortunate and it is just bringing the right horses here. You don’t do all this travelling and come over here for the fun of it. Line of Duty is a neat horsed and seems to like getting squeezed up and being in a battle.

‘I was confident in this horse. After he won (the Prix de Conde) at Chantilly I spoke to William and we both thought he had the right profile to come her be competitive.

Reflecting on last night’s defeat of his Nassau Stakes and Prix de L’Opera winner Wild Illusion, who will stay on training next year, Appleby thought she has been caught out by the 1m 3f trip.

He added: ‘We have lost nothing in defeat. She has run a very solid race again at group one level. She slightly flattened out for a or two. A mile and a quarter is her trip. She travels for fun and she just has that one burst of energy.’

Wild Illusion’s conqueror Sistercharlie runs for leading US trainer Chad Brown. His filly Newspaperofrecord, effortless winner of Friday’s Juvenile Fillies Turf, could be aimed at the Coronation Stakes at Royal Ascot next year.