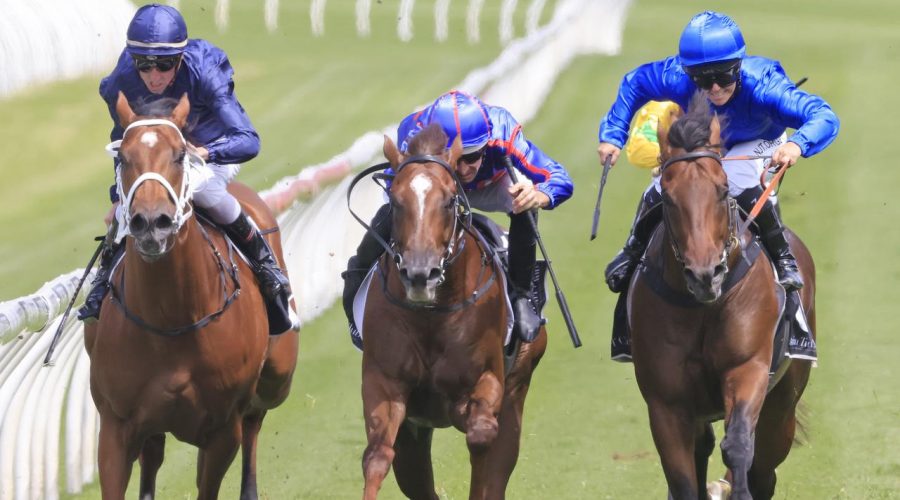 Anamoe franked the Blue Diamond form, Profiteer, Home Affairs and Stay Inside didn’t have their reputations diminished by defeat, Remarque is out of the Golden Slipper mix.

That was the wash-up after a thrilling Group 2 $300,000 Todman Stakes (1200m) at Royal Randwick on Saturday that proved compelling but far from conclusive.

The connections of Profiteer, Home Affairs and Stay Inside have every reason to look forward to the $3.5 million Golden Slipper in two weeks with hope and optimism despite losing to Anamoe.

But as the losers licked their wounds, Godolphin trainer James Cummings is looking ahead to the Golden Slipper with justified confidence after Anamoe’s fast-finishing win.

Anamoe in the shadow of the post! What a win to take out the Todman Stakes. Gun ride from @RachelK11 for @godolphin! pic.twitter.com/wlzzsmuMxf

“He’s a classy colt no doubt about that,’’ Cummings said. “We have barely breathed on the horse once he got back from Melbourne and he had to absorb a bit of that pressure, come back underneath them and attack the line so strongly.

“We tried to leave a little bit of improvement in him over the next couple of weeks.

“We didn’t want him winning by 10 lengths but we were quietly confident that he could upset the favoured horses. He’s got Golden Slipper written all over him.’’

Anamoe ($9) followed his third placing in the Blue Diamond behind Artorius to underline his Golden Slipper claims by running down Profiteer ($2.25 favouritism) to win by a head with Home Affairs ($21) a long neck away third.

Stay Inside ($3.20) didn’t have a lot of galloping room in the straight but found the line well to finish fourth, beaten less than two lengths, as Remarque faded for fifth.

Rachel King, rider of Anamoe, said the colt has improvement going into the Golden Slipper.

“He has put his hand up today, he had to against these kind of horses, this was going to prove where he is at,’’ King said.

“His form in Melbourne was very strong and taking the blinkers off today meant he really relaxed in the run and did everything right. I think we have a really exciting horse and has that little bit of improvement to come.’’

The Todman Stakes has proven a reliable Golden Slipper guide in the last decade with Farnan (2020), Vancouver (2015) and Pierro (2012) winning both races while Sepoy (2011) and Capitalist (2016) bounced back from second placings in the Todman to win the Slipper two weeks later.

Profiteer lost his unbeaten record but not Golden Slipper favouritism with his narrow defeat.

Trainer Mick Price admitted Profiteer did over-race a little early in the race under jockey Hugh Bowman but he wasn’t using this as an excuse.

“We were four weeks between runs and I guess he was a touch keen in the first 300m then I thought he settled well,’’ Price said. “If you have a look at the sectionals per furlong, I thought they were sensible unlike the (Inglis) Millennium.

He's a classy colt! Hear from @JamesCummings88 after Anamoe and @RachelK11 had a monster win for @godolphin in the Todman. pic.twitter.com/6LuN906j2d

“I thought it allowed him to finish but he peaked about 100m out. Hughie said it will be a different story in the Golden Slipper.

“I didn’t want to get beaten today but it still looks good for the Golden Slipper. I think we have the right horse and I’m confident, still.’’

Newgate Farm supremo Henry Field, a part-owner of Profiteer and Stay Inside, has been in this situation before.

Field was in the ownership of Capitalist when that colt lost his unbeaten record when second in the Todman Stakes before bouncing back in the Golden Slipper five years ago.

“The reason this is such a great trial for the Golden Slipper is that most of the colts have qualified and you know they will peak in two weeks.

“I’m confident these two colts will be better again for the Golden Slipper so outside of winning, I was very pleased with how they ran.

“I don’t feel as hollow as I did in 2016 when Capitalist ran second and it franks the Blue Diamond form with Artorius.’’

Field is in the remarkable position of having shares in the three colts at the top of Golden Slipper betting – favourite Profiteer ($5), Stay Inside ($6) and Artorius ($8). Anamoe has firmed from $26 to $9.

Coolmore’s Tom Magnier watched with interest the head-on vision of the Todman finish which showed Home Affairs being inconvenienced near the line.

“Home Affairs has run a cracker,’’ Magnier said. “We were really happy with that run. He’s a live chance in the Golden Slipper.’’

Glistening led most of the way to win the Group 2 $300,000 Reisling Stakes (1200m), earning automatic entry into the Golden Slipper in two weeks.

And Hall of Fame trainer Gai Waterhouse is likely to get a chance to win an eighth Golden Slipper after her filly Swift Witness powered home to just miss running down Glistening in an exciting, close finish.

Freedman, who already has top colt Stay Inside in the $3.5 million Golden Slipper, said Glistening has surprised the stable with her rapid improvement in recent weeks.

Glistening takes out a thrilling edition of the Reisling Stakes! What a season the @Freedman_bros are having. pic.twitter.com/AAMOaRVuhG

“A month ago we didn’t have her in the Slipper picture but she is one of those two-year-olds that just keeps improving,’’ said Freedman who trains in partnership with his brother, Richard.

“It wasn’t probably the plan to lead today, I don’t think she is necessarily a jump and sit on speed type but we were dictated a bit by the barrier.

“I gave Jean the option to go forward and leading if he had to and he rode her very well.

“I’m really thrilled for Jean, he works so hard with us and travels all over NSW to pick up rides. He deserves the success that comes his way.’’

Van Overmeire admitted he was a “bit lost for words” after winning the first Group race of his riding career.

“I don’t really know what to say, I’m over the moon,’’ Van Overmeire said.

“But a big appreciation goes to the Freedman Brothers, they really support me and give me opportunities as we can see here. I’m very, very grateful.”

Glistening ($16), part-owned by James Harron who raced 2016 Golden Slipper winner Capitalist, held off the late charge of Swift Witness ($9) to win by a short half head with Trifaccia ($13) nearly a length away third.

Pretty Woman ($4.80 favourite) is still trying to get out from behind a wall of runners and went to the line without being tested, finishing ahead only of Gstaad.

Freedman said the win of Glistening made up for the disappointment of Stay Inside’s luckless fourth placing.

“Stay Inside ran to his name!’’ Freedman said. “It was a bit frustrating but in those small fields with bad barriers, it meant we were forced to ride him back a bit. He’s come through the run well and we’ll push on for the Golden Slipper with Stay Inside and Glistening.’’

Swift Witness ran an outstanding race to charge from midfield and finish the closest of seconds. She has now earned just over $120,000 prizemoney which puts her into the elite 16-horse Golden Slipper field, although there are three qualifying races remaining – the Black Opal Stakes at Canberra today the Pago Pago Stakes and Magic Night Stakes at Rosehill next week.