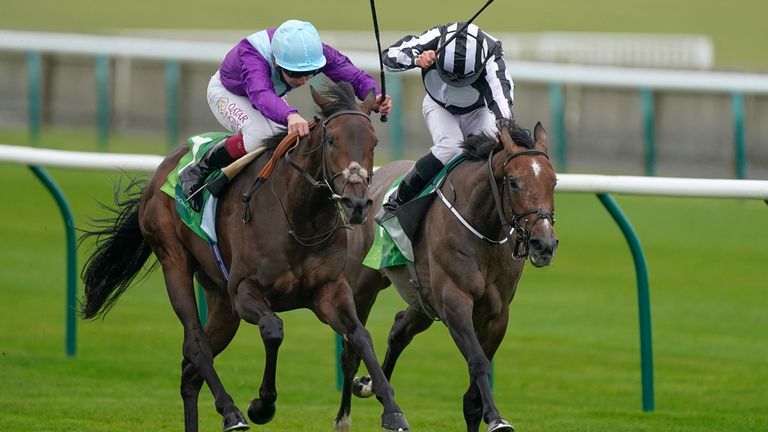 Alcohol Free puts her Classic credentials on the line as she returns in the Dubai Duty Free Stakes at Newbury.

Andrew Balding’s charge won the Cheveley Park Stakes on her final juvenile outing, giving her owner Jeff Smith a first Group One win since Arabian Queen sprang a 50-1 shock in the 2015 Juddmonte International.

David Bowe is general manager of Smith’s Littleton Stud, and the team there are excited to take the wraps off their flagship horse for the 2021 campaign on Sunday, in a race registered as the Fred Darling Stakes.

He said: “We are certainly looking forward to getting started for the year, and it looks like she has trained on.

“She came back to Littleton for her winter break, and then we sent her back to Andrew after Christmas, and he has been pleased with her since.

“I think she will stay the seven furlongs, but we will find out much more in regards to her trip on Sunday.

“Oisin (Murphy) has been to ride her. He was very happy with her, and Andrew is confident she has trained on.”

Smith is famed for his homebred stars such as Lochsong, Dashing Blade and Arabian Queen – but Alcohol Free is a rare purchase for the owner, having been bought by Bowe for 40,000 euros as a foal back in November 2018.

Bowe added: “There’s always a certain amount of luck involved with these things, but I’m delighted it has worked out so well and that she has turned out to be a good one for Jeff.

“With Jeff being an owner-breeder, you know these kind of fillies will be coming back into the fold when they have finished racing.

“We’re not short of black-type calibre mares here by any means – but as we bought her, she brings a different bloodline. She a very nice filly, though – she has a Group One win and she will let down into a lovely broodmare when the time comes.”

Alcohol Free will face some familiar rivals in a 17-strong field, with Cheveley Park third Umm Kulthum in opposition, but none more so than the Richard Hannon-trained Happy Romance.

The duo have clashed twice previously, with Happy Romance coming out on top in the Dick Poole Stakes – one of her four juvenile wins – before Alcohol Free reversed the form when beating her old rival into fourth in the Cheveley Park.

“She won the Super Sprint, then she went to the York sales race and won another fortune and then to the Group Three at Salisbury,” Hannon told Sky Sports Racing.

“I do think she’s slightly under-appreciated in terms of what she has achieved – that was an awful lot to achieve in one year.

“She was never a two-year-old for me. I always thought she was a big girl who is going to make a nice three-year-old -and hopefully make a miler.

“I think she’ll be better for going further and I think she’s improved from two to three. She’s a tough filly and she’s very happy.”

Dandalla is another to renew rivalry with Alcohol Free, having suffered her only defeat in four juvenile starts when beaten just over five lengths in fifth at Newmarket.

Karl Burke’s filly had previously landed the Albany at Royal Ascot in impressive style before just holding on in the Duchess of Cambridge Stakes at Newmarket, with her North Yorkshire-based trainer admitting the daughter of Dandy Man was not at her best in the second half of the campaign.

He is also aware that switching up to seven furlongs for the first time is a learning curve, although he has full faith in Dandalla’s stamina.

Burke said: “She’s been ready to run for a couple of weeks now and is getting a bit bored going up and down the gallops.

“We’re very much looking forward to running her. She looks fit and well and great in her skin, actually.

“It’s a trial and it’s a trial for us on trip as much as anything. I personally think she’ll get seven furlongs stood on her head, and it’s a question of whether she’ll get a bit further or not.

“In her work at home, she’s definitely not slow. The options are there, and we’ll know after Sunday whether to drop her back to six or whether we should give her a go over a mile.”

He added: “After Royal Ascot, she was never really moving as well as she had been beforehand. We were always behind the black ball a little bit.

“She had a good rest after the Cheveley Park and has been moving brilliantly all spring.

“We couldn’t be happier with her really, and I expect her to run very well.”

Isabella Giles has already won twice over seven furlongs, claiming the Group Three Prestige at Goodwood before adding the Group Two Rockfel at Newmarket to her CV.

However, the daughter of Belardo failed to sparkle on her final outing, with trainer Clive Cox believing her lacklustre ninth place was down to the effects of a busy campaign after six runs in total.

He said: “She’s wintered really well, and we’ve had a good prep with her. She’s improved physically, as you would expect from two to three, and her work’s been very pleasing.

“I think we can excuse her the run in the Fillies’ Mile after a busy enough season. I hope we can step back into a positive performance this weekend, because all her other performances were rock solid.

“We’ll take it a step at a time, but I’m very pleased that we’re coming here with a filly that seems to be in good form.”

John and Thady Gosden are double-handed, with all-weather winners Miss Finland and Wild Iris taking a huge leap in class.

Gosden said: “One has run twice and the other only ran once.

“They are there to learn, just to get them going, get them out.

“The aim is to find out whether you’ve got a nice one, and you (sometimes) find out you probably haven’t, but it’s all educational stuff for them.”

The Roger Varian-trained Zaajirah won on her only start for Roger Varian last year, taking a Kempton novice event, with owners Shadwell’s racing manager Angus Gold curious to see how she fares in much better company.

Gold said: “She won well on her only start and has been pleasing them with her work.

“When they’ve won a maiden, you don’t know where you are – but she looks a nice, progressive filly in her homework.

“She obviously lacks experience, but she hasn’t done anything wrong so far, so let’s see where she fits in.”