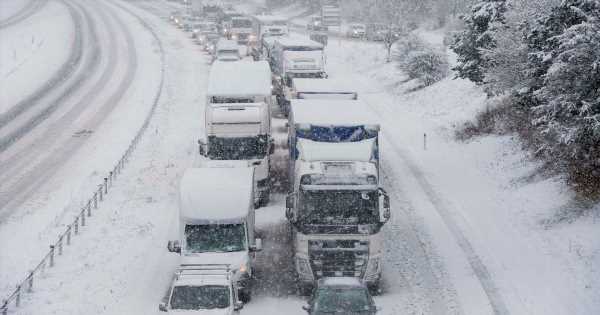 All three of Saturday's National Hunt cards have to pass morning inspections to get the go-ahead.

Chepstow, Kempton and Wincanton are subject to 8am checks from officials.

The first-named venue is due to stage the rescheduled Coral Welsh National, after its original meeting on December 27 was scuppered by the weather.

The course has been covered by frost sheets since the start of the week.

On Friday, traffic chaos on the A1 led to a spate of non-runners at Newcastle.

The race meeting saw 20 horses miss their intended races as they were severely delayed on the way to the track in snowy conditions.

Jockeys Kielan Woods and Harry Reed were also forced to give up their intended mounts when the motorway became gridlocked.

One of the longest travellers on the card, the Charlie Longsdon-trained Moon King, was one of the absentees from the 1.40pm race.

The horsebox left the stables in the Cotswolds at 5am, but by 9am traffic was brought to a standstill.

"They got stuck at 9am with 34 miles to go and they were still there at 1pm," Longsdon said.

"It was due to the snow and accidents ahead of them.

"They turned around and they probably won't be back until 6pm.

"It's just one of those unfortunate things."

Simon West's Fabuleux Du Clos was withdrawn by the vet at 12.24pm due to his late arrival.

The six-year-old was set to line-up in the 12.40pm contest, the QuinnCasino Standard Open NH Flat Race.

On track, staff worked tirelessly to beat the elements ahead of the Jumpers Bumpers fixture.

Ironically it was a replacement for the scheduled National Hunt meeting, as the turf was waterlogged.

"It has been challenging," said clerk of the course James Armstrong.

"We had snow overnight and staff were in from the early hours to make sure the track was OK, while others worked on the access roads around the course.

"The weather fortunately improved towards midday."

January 8, 2021 Horse Racing Comments Off on A1 snow delays to lead to 13-hour trip for Newcastle non-runner
NFL News