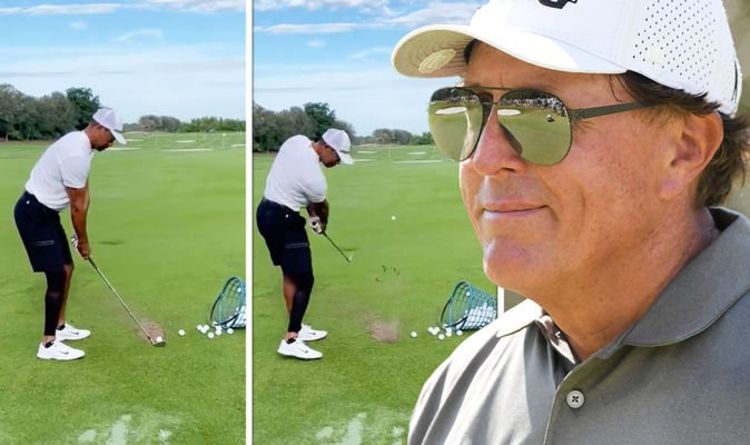 Tiger Woods’ long time rival Phil Mickelson has fired a strong warning to the 82-time PGA Tour winner, after Woods shocked the world yesterday by returning to the driving range nine months on from a devastating car crash.

Woods has not been seen with a golf club in hand since suffering severe injuries in the accident in Los Angeles earlier this year.

The golfing great was in the LA area to host the annual Genesis Invitational one day before the crash, and has not featured in a PGA Tour event since the 2020 Masters last November.

The 45-year-old’s recovery has been a private one, with updates on his improvements coming from friends and second parties rather than Woods himself.

However the 15-time major winner gave the biggest update yet by uploading a video to his Twitter page of him back hitting golf balls on the driving range.

The video sent the golfing world into a social media frenzy, and has attracted over seven million views in just 24 hours.

JUST IN: Justin Thomas calls Rory McIlroy ‘one of my favourites’ after European Tour meltdown

Golfing fans from around the world took to Twitter to express their delight to see arguably the sport’s greatest competitor with a golf club back in his hand, including long-time rival Mickelson.

‘Lefty’ took to his own personal account to tweet: “As I’m hanging in Montana, it’s great to see Tiger swinging a golf club again.”

As well as showing his support for Woods’ return, he also had a big warning for the 15-time major champion ahead of what would be another remarkable return from the 45-year-old.

He added: “I know he can’t stand me holding a single record so I’m guessing HE wants to be the oldest to ever win a major. I’ll just say this. BRING IT!”

Mickelson became the oldest man to win a major title earlier this year, after he secured an historic win at the PGA Championship at the Ocean Course by two shots back in May.

During the American’s prime he often went toe-to-toe with Woods, as the pair played out one of the great golf rivalries in the sport’s history.

Despite being America’s – and the world’s – top two golfers for some time the pair’s relationship was often a frosty one.

However, after nearly 20 years of competing against each other they finally looked to have put their differences aside, as they grew close at the 2016 Ryder Cup event.

Speaking about how their relationship finally began to blossom, Mickelson previously said: “Our relationship turned around 2016 when we were working together for the Ryder Cup.

“He was an assistant captain. We spent a lot of time on the phone. When we worked together for a common goal, it brought us closer.”

Woods was forced to miss out on playing in the event against America’s European rivals five years ago due to ongoing back problems that have plagued his career in recent years.

However, he echoed Mickelson’s comments and revealed he was a real factor in helping him get through his back problems after they grew closer at Hazeltine.

He said: “When I was trying to deal with the nerve [pain] in my back, trying to come back and trying to play and I wasn’t very good, he always texted me some very encouraging words.

“On top of that, when you guys all saw how I was chipping so poorly [in 2015], my nerve and my back was not doing very good and I was flinching a lot, he offered numerous times to help. He’s one hell of a competitor and it’s always a challenge to try to beat him.”