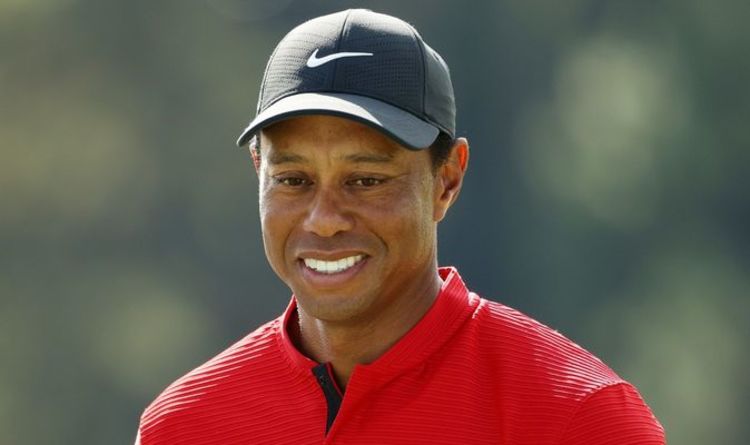 Tiger Woods has shared the most significant update on his golf comeback since his horrific car crash. The 15-time major winner was rushed to hospital after being involved in a single-vehicle accident in Los Angeles back in February.

Emergency crews found an SUV upside down in a wooded area, located around 30 feet from the main road.

Woods suffered serious leg injuries when his car hit a kerb and then a tree before rolling several times on the border of Rolling Hills Estates and Rancho Palos Verdes in Los Angeles on Tuesday morning.

Horrific images from the crash site have been broadcast across US networks and shows the front windscreen of the vehicle appears to be smashed and the front bumper of the car crushed.

Nine months later, the golf legend posted a short clip of him on the driving range taking a full swing of the club through the ball.

The 45-year-old’s right leg was wearing a protective gear on his right leg as he practiced his swing while making a gradual recovery from the shocking accident.

Woods gave the video the simple caption of: “Making progress”, which was liked over 105,000 times on Twitter.

He has not played in a PGA Tour event since November last year when he featured in the rescheduled 2020 Masters, but was then ruled out for the remainder of the year and beginning of 2021 through injury.

Initially the 15-time major champion was expected to return to the Tour at some point this campaign, however after being involved in the vehicle accident in February of this year his absence has now stretched to a year.

Earlier this month, American Ryder Cup star Justin Thomas gave a fresh update on Woods, who he meets with two or three times a week when he is at home.

Discussing Woods’ possible return with No Laying Up, Thomas said: “I know how determined he is and I know he is going to at least try and give something again. I mean, obviously I hope he does.

“He’s doing well especially all things considered. Every day is exactly the same for him.

“He’s able to be a dad again which is most important, y’know, he’s still his sarcastic a**hole self so nothing’s really changed there, so I’m glad to see he’s as chipper as always.”

Thomas does believe Woods will only head back out on Tour if he is able to compete at the highest level.

“I don’t see him ever playing if he can’t play well.

“He doesn’t strike me as a guy that’s like, y’know, he’s played at home shooting a bunch of 75s and 76s and he’s like, ‘alright, I’m gonna go give Augusta a try this year’, that’s just not gonna be him.”

November 21, 2021 Golf Comments Off on Tiger Woods gives biggest update yet on 2022 comeback with special insight on rehab
NFL News