‘I understand the passion, pain and stupidity of golf’: In his 90th year and still going strong PETER ALLISS holds forth on Open heartache, continuing to commentate for the BBC, snubbing an OBE and Rory’s Augusta hoodoo

The Voice of Golf is now in his 90th year and it might be true that those wonderfully mellifluous tones have finally lost a touch of timbre.

But what is also in evidence during a delightful hour on the phone with Peter Alliss is that his powers of observation have remained intact.

There is great insight and humour as we cover the whole gamut, from his vivid wartime memories to thoughts on the great players of yore, to the missing piece in Rory McIlroy’s armoury. 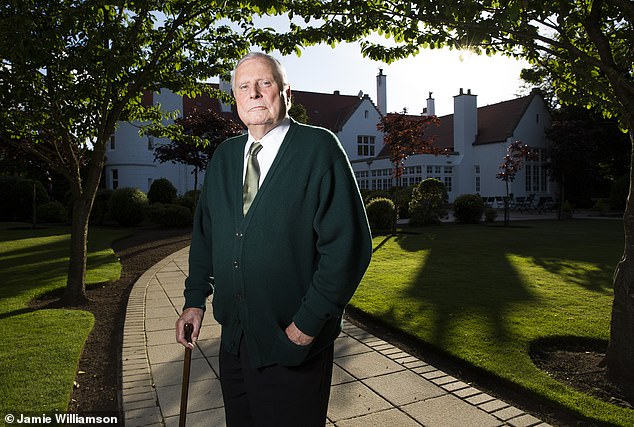 His opening remarks, on the fragile state of the world at present, offer a telling flavour.

‘Nothing like this has happened in my lifetime,’ he begins. ‘I remember the war very clearly from 1941 onwards, but it was very different from this.

‘Golf was played, pubs and restaurants were open, although they didn’t have much to sell.

‘Now there is just so much that I find disturbing. I read in the Mail the other day that possibly a third of bars and restaurants will not reopen. The following day I read that British Airways might pull out of Gatwick Airport. They’re just frightening possibilities, things I never dreamed could take place. 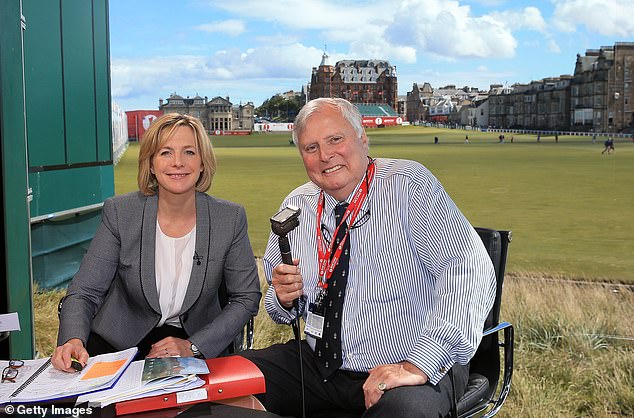 Alliss, with Hazel Irvine, covering the Women’s British Open for the BBC at St Andrews in 2013

‘And what will happen to the golf clubs with smaller memberships in rural locations, delightful though they may be. How will they manage, if the members don’t rally around?

‘Even the affluent clubs down here in the South of England, a number of those are finding things very difficult. I can’t really see an end to it, and I think we’ll be very lucky if we get any serious golf this year. I’m sorry, am I being too gloomy?’

Alliss has been labelled the Voice of Golf for so long, it’s easy to forget the enormous contribution he made to other fields of the game. 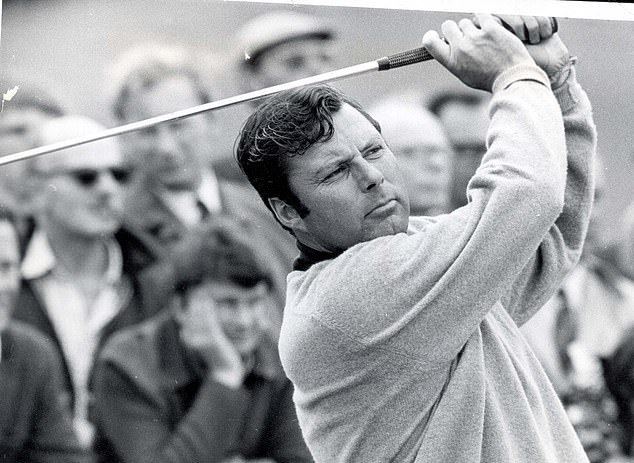 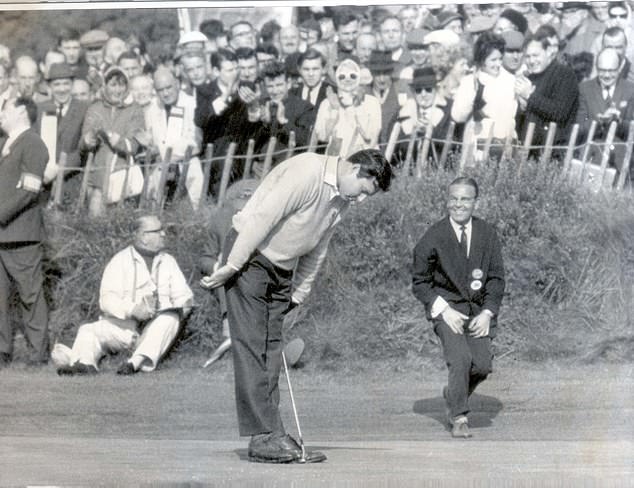 THE BEST OF THE VOICE OF GOLF

Undoubtedly Jack Nicklaus. The most exciting was Arnold Palmer, then Seve Ballesteros, while Lee Trevino was a genius. There was also a long period where Tiger Woods played shots and achieved things that previously had seemed impossible.

I like simple swings, like Gene Littler, Peter Thomson and Luke Donald. Of today’s lot, Rory McIlroy has wonderful tempo. I’ve never seen Rory off-balance, which is simply amazing given he hits it so far.

It’s difficult to make our Open No1, because it’s been beaten at least 10 times in my life by the weather. It’s awful when you get the wind and rain. But it is majestic when you get up on a hill and look around. The smoke and mirrors of the Masters is extraordinary. I don’t like everything they do, but their presentation is fantastic.

Peter O’Sullevan on horse racing. He had the most difficult job of all of us, and he was quite masterly, the way he seemed to know the colours of all the jockeys’ silks. I loved Bill McLaren on rugby because even when Scotland were winning he never got carried away — unlike dear old Murray Walker!

I’ve always liked courses with heather, pine and silver birch. Places like Ferndown, Swinley Forest, Sunningdale, Formby, and Blairgowrie. They have a sublime look in the spring and summer. Best performance? There have been so many from the Big Three and Tiger. But Tony Jacklin winning the Open at Royal Lytham in 1969 was a great moment. We were desperate for a champion, and he came along and for a few years he did wonderfully. He was such a bright star. I liked him.

I got to know Lee Trevino very well during the days of the BBC celebrity pro-am series and he was fascinating. He always wanted to learn things, from how to play cricket to what was happening in Northern Ireland. I also think Jack Nicklaus has come out of his shell in the last 15 years. He’s brilliant when explaining his approach and how he got things done. Every young player should listen to him.

I would love to have seen Walter Hagen and Bobby Jones play. I never saw my father play in his prime, either, although Sir Henry Cotton told me he was a beautiful golfer. Those old players were the most talented the game has seen, going round the likes of Hoylake and Deal in 72 and 73, playing in Norfolk jackets with balls that were not even round and the equipment they had. Bloody wonderful

He was a hell of a player for a start.

‘I’ve been very lucky in that I’ve had four or five lives,’ he says. ‘My dad (Percy, a leading player in the 1920s and 30s) told me I was never going to be a doctor or a lawyer but I was a decent golfer and would always get a job if I got a Ryder Cup cap. I didn’t work very hard at it, but I enjoyed club life.

‘I liked playing in a tournament in Leeds and then coming home for the weekend to my club job at Parkstone near Bournemouth, to look after the members.

‘I played in eight Ryder Cups, 10 World Cups, won 20-odd good tournaments and 10 others like the West of England. I retired at 39, I was getting divorced, and things were happening.

‘With Dave Thomas, I went into the design business and built 40 or 50 courses, and then 25 more with Clive Clark. I’ve been on PGA and Ryder Cup committees, written 20-odd books, had newspaper columns. So there’s not much in golf that I haven’t done.’

It’s getting on for 60 years since he got his big break in television, working part-time for the BBC at the 1961 Open, where he finished 8th. ‘I didn’t know what was going on at first,’ he says. ‘But I’ve always been blessed with great powers of observation. I can understand the passion, the pain and the stupidity of the game. The rudeness, the shallowness and the greatness of it all. The cold-blooded courage to sink a putt and win the Open.

‘Golf can be boring at heart, in that essentially you whack a ball and then you whack it again.

‘There’s not a lot of colour in it, except the condition of the course and its location, the players and what they’re wearing. Spectators kept in check by a piece of string, and kept quiet by a man holding up something that resembles a table tennis bat. I always thought they were things worth noticing and commenting about.’

There’s been one or two regrets along the way. ‘It would have been nice to have seen the Alliss name on the Open trophy,’ he says. ‘The old man came close (Percy had no fewer than 10 top 10 Open finishes), but the best I did was four shots away. I just never played my best in that event. If I’d played in the Open like I did at the Ryder Cup, I’d have had a chance.’

There’s also the matter of turning down an OBE some 30 years ago.

‘I honestly didn’t think I was worthy at the time,’ he says. ‘For services to golf? I would have taken it for charity, for our wheelchair crusade that raised over £10million.

‘Looking back, though, it is disappointing for the family. By now it might have led to something else.’ Is it too late for him to receive a richly-deserved knighthood?

‘Of course it is… I’m eighty-bloody-nine!’ he roars.

Who knows where we’ll be come November, but Alliss intends to be at the Masters, if at all possible.

He wants to see if Rory ‘can sort out his brain’ and complete the career grand slam. All being well, he’d like to retire following The Open at St Andrews, now pushed back to 2022.

‘If they say things are clear, of course I’ll be at Augusta,’ he says. ‘I’ve been given another year by the BBC, and we’ve got to start back again sometime. We can’t go back to the time of Sir Francis Drake, with only 20 ships on the sea.’

Related posts:
May 22, 2020 Golf Comments Off on PETER ALLISS holds forth on Open heartache and Rory's Augusta hoodoo
NFL News