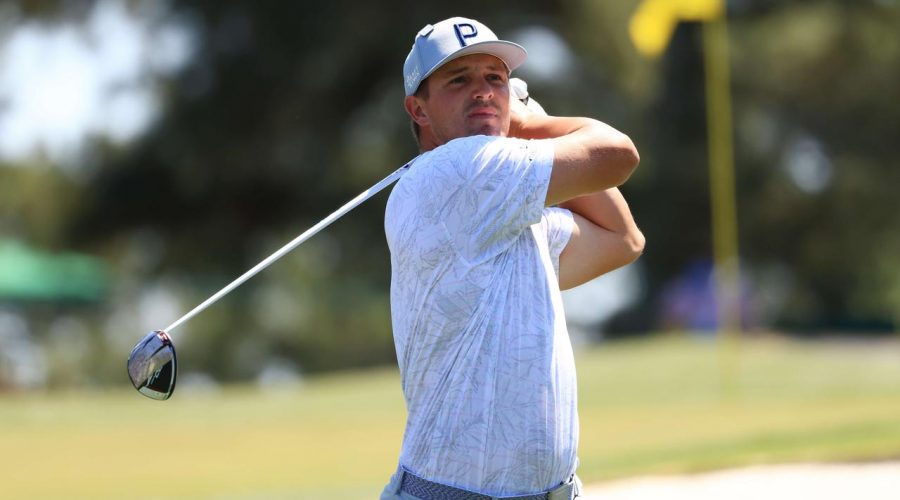 Adam Scott will get a close up look at Bryson DeChambeau’s second attempt to take down Augusta National with his big bombs off the tee after being paired with the US Open champ for the first two rounds of the Masters.

DeChambeau has been the talk of the range after vision of his efforts to monster the ball with his driver, trying to reach club head speed of 200kmh, set tongues wagging.

He wasn’t a factor at the Masters last November in his first visit as a bulked-up golf hulk who had talked about taking on the course from the tee box, without properly factoring in the nuances of the tricky Augusta layout.

The result was only one round in the 60s, as opposed to a record four from Aussie Cameron Smith. and DeChambeau finished in a tie for 34th, alongside Scott.

DeChambeau revealed his driving range exploits were more a warm-up exercise than a sustained effort to hit the ball further, and that he’d learned some crucial lessons from his approach last year.

“Length is only as good as you can hit your next shot, is what I always say,” he said on Wednesday.

“And that‘s the most important thing about Augusta National, is it doesn’t test just the driving. It tests your second shots, it tests the third shot, it tests — you’re making for par, your 4-footer you’re trying to make for par.

“There are certain holes out here where length does help tremendously. But, again, you go up around those putting greens, and you just try to hit it into those areas of the green where the pins are, and it becomes very diabolical.”

Scott, who ironically said he thinks he needs to drive it better to replicate his winning effort in 2013, also agreed that the Augusta greens were ready to bring even the best undone this week.

“From Monday, the greens are fiery, almost all of them,” he said.

“Usually in the past when it‘s been good weather, you’re kind of lulled into a false sense of security Monday, Tuesday, Wednesday around here and then they cut your legs out from under you on Thursday and you’re scared every chip shot.

“In my memory, 2007 had the firmest greens I think I‘ve played here in my years. In the practice round I actually remember being on the 16th green with Greg Norman and poured some water on the slope and the water just trickled all the way across and off the green. It never got absorbed.

“I didn’t do that today, but it looks kind of similar. The grass around the greens and the firmness and the speed of the greens had that brown tinge on it. If that’s a sign of things to come, we’ve got to buckle up for this week.”

April 6, 2021 Golf Comments Off on Masters news: Big bombs off the tee won’t be as important as putting on ‘fiery’ Augusta greens
NFL News