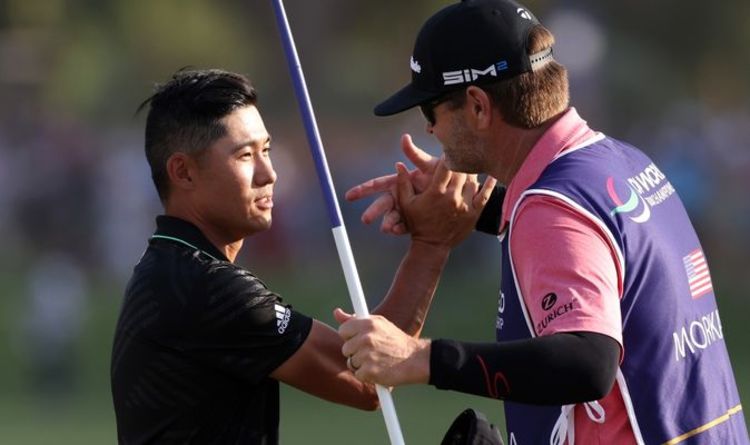 Collin Morikawa has claimed the DP World Tour Championship, and in doing so the Race to Dubai title to pick up a cool £3 million in combined prize money thanks to a six-under par 66 in Sunday’s final round.

Morikawa headed into the European Tour’s season finale top of the Race to Dubai standings needing just a top eight finish to become Europe’s number one player, but ensured he left the Middle East with two pieces of silverware by winning the final tournament of the campaign.

His double in Dubai caps off a quite remarkable campaign for the youngster, after also being crowned Open champion and playing a key part in USA’s Ryder Cup victory in 2021.

Overnight leader Rory McIlroy was the man who was expected to join the Morikawa in collecting one of the two prizes on offer come the end of the event, however a staggered finish from the Northern Irishman allowed the Open champion to swoop in and take both titles.

Englishman Matt Fitzpatrick was one man who came close to denting Morikawa’s chances of both titles, as he made his move from the middle of the pack by carding an impressive six-under par 66 as he looked to stage a late move.

A remarkable final day fittingly capped off 50 years of European Tour golf, as the event will be rebranded as the DP World Tour ahead of the beginning of the 2022 season next week in South Africa.

Prior to the American’s birdie flurry it seemed as if Fitzpatrick posed a real threat to Morikawa’s Race to Dubai title, however the American’s class late on ensured the Englishman’s impressive final round proved too little too late.

Morikawa began the day three shots off the lead at the Earth Course and kicked off his final round in patient fashion, parring his first six holes before finally collecting his first birdie of the day on seven.

And patience would be the key to the American’s success in the Dubai sun, as he again bided his time – whilst the rest of the field exchanged birdies for bogeys – by picking up three pars in the first four holes after the turn, whilst also adding an all-important birdie at 12.

What was to come next however proved just why Morikawa is tipped to be one of the game’s greats, as when he needed a run to get himself to the top of the table he sure delivered it.

Knowing he needed birdies quickly if he was to collect the double, the youngster showed exactly why he is one of the world’s best as he took the final stretch of the Earth Course to the sword.

Having picked up only two birdies all day, the Open champion produced four in his last five holes to ensure he not only collected the Race to Dubai trophy, but also the DP World Tour Championship in spectacular fashion.

Whilst Morikawa made his move, McIlroy in the group behind was staggering his way to the finish, despite still holding the lead at the turn.

A level-par front nine still kept the Northern Irishman in control of the event, and when he added a birdie at 10 the four-time major winner looked set to take the European Tour’s finale event for a third time.

However, McIlroy proved no match for the roaring Morikawa, as whilst the American was rolling in the birdies the Northern Irishman found himself in all sorts of trouble as he bogeyed three of his last four holes.

The disappointing finish saw McIlroy slide down the leaderboard, as his two-over par 74 saw him finish in a tie for sixth on 12-under in the tournament leaderboard, and 20th in the Race to Dubai standings.