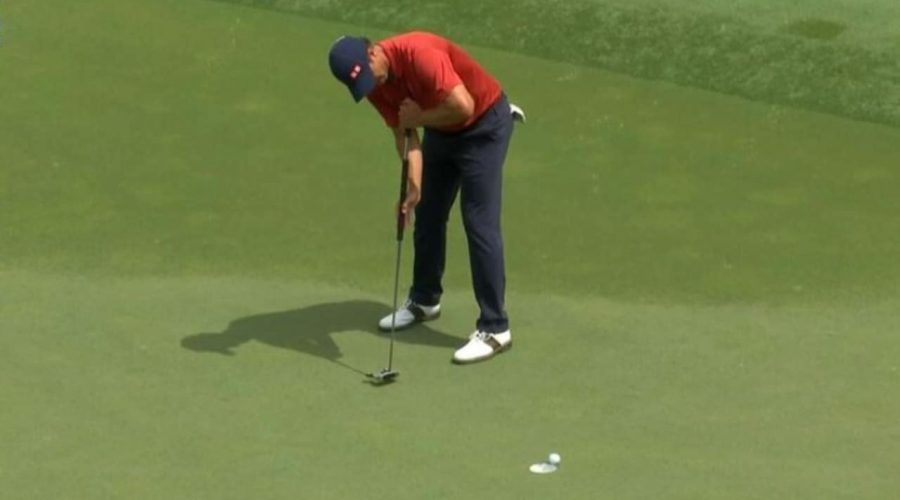 Even eventual winner Kevin Kisner was sure Adam Scott was going to make the short putt to win his 15th US PGA Tour title and collect $1.5m.

But from just over 1m away, on the first hole of a six-way playoff at the Wyndham Championship, having carded a final round 65 to join the leaders, the veteran Australian’s birdie putt slid by the left-hand side of the hole.

The six men all went back to the 18th tee and, despite Scott swatting another perfect drive, only Kisner was able to hit an approach close, and the American hoisted the trophy after making birdie.

“I never thought that Adam was going to miss that putt,” Kisner said.

Scott putted last of the six men in the record-tying playoff, which the victor said could have been a factor.

“Credit to him, he came right back and hit another great drive and a great shot.

“It’s a fickle crazy game that we play. The line is too thin between reward, success and jubilation to just being distraught leaving here.”

Adam Scott was 53 of 54 for the week inside 5 feet. pic.twitter.com/P4aQJYnjfy

Scott left the Sedgefield Country Club in North Carolina without talking to the media after losing a playoff for the first time in his illustrious career.

The 41-year-old had made all 53 of his putts from short range during the tournament, which included a third round of 64, but couldn’t do the same when it mattered most.

It came after some prophetic words following his round on Saturday, Scott having found some quality play just in time to qualify for the lucrative FedEx Cup playoffs at the last minute.

“Sometimes it just has to come down to do or die to actually find it,” he said.

“I don’t know why it’s so hard other weeks of the year, you can’t fake that mindset, but this is what it is.”

Scott’s near miss also comes a week after fellow Australian Cameron Smith cost himself $2m with a final hole double-bogey at the St Jude Invitational after an errant tee shot and then a decision to try to play his second shot from the trees.

Both Scott and Smith will now head to New York for the $13m Northern Trust Open at Liberty National Golf Club, the first event of the FedEx Cup.