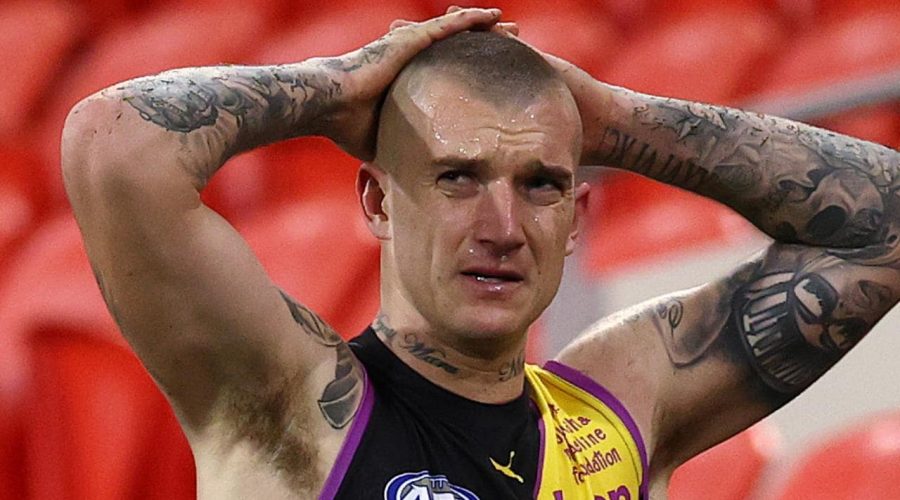 An injury to Richmond superstar Dustin Martin has overshadowed Richmond’s upset victory over the top-four Brisbane Lions at Metricon Stadium on Friday night.

It’s unclear as to the exact nature of the injury, but it looks as though the Brownlow Medallist suffered a nasty rib injury. He collapsed to the ground in agony at the time of the collision with Brisbane hard nut Mitch Robinson in the third quarter, and was on all fours again as soon as he made it to the boundary line.

Two of the toughest men in footy go BANG 💥

But luckily for the resurgent Tigers, they wouldn’t need Martin’s brilliance to finish off the Lions as Jack Riewoldt celebrated his 300th game in fine style, booting six goals to help Richmond temporarily move back into the top eight. Mabior Chol bobbed up as well with four majors.

Martin was in agony after his collision. (Photo by Russell Freeman/AFL Photos via Getty Images)Source:Getty Images

The result stopped the haemorrhaging for Richmond after four losses in a row, including three consecutive defeats to bottom-10 sides, saw them tumble down to 12th spot on the ladder.

Meanwhile, what looked like a minor hiccup for Brisbane against St Kilda last week, now looks like a decent-sized wobble, with the side’s spot in the top four looking precarious at the worst time of the season.

Richmond started the game like the Tigers of old, rediscovering their intense forward pressure and dominating the territory battle to lead by two goals early in the second term.

But on the back of superior clearance work, and a more threatening forward line, the Lions kicked six of the next eight majors, including a pair to Joe Daniher, to take a 13-point lead early in the third quarter.

However, Riewoldt and Shai Bolton then stamped their authority on the contest, turning the tide for the Tigers who kicked the next five goals, three of which came off Riewoldt’s boot, to open up a 17-point gap on the Lions just before the final break.

Richmond regained the ascendancy around the stoppages and flexed its muscle in contested situation to overwhelm Brisbane, who failed to get a meaningful foothold in the game for the remainder of the contest.

In keeping with the chaos that Covid has wreaked on the AFL fixture, the match was delayed by 15 minutes as both teams were stuck in traffic on the freeway due to a pair of car crashes.

What a difference 'Nank’ makes

The Tigers have been struggling in the ruck since Toby Nankervis injured himself in round 11, particularly recently against St Kilda (Paddy Ryder/Rowan Marshall) and Collingwood (Brodie Grundy). But he made an instant impact in his return, and his influence in the middle of the ground was a huge reason behind the Tigers’ stunning return to form.

Riewoldt became just the fourth man to play 300 games for the Tigers and just the third player ever to kick six goals in a 300th. Pic: Michael KleinSource:News Corp Australia

No Hipwood, No Adams, No Lions?

Brisbane got its first look at life without key bookends Eric Hipwood (knee) and Marcus Adams (foot), and while the side took enough marks inside 50 to suggest it could potentially cope without Hipwood in the long run, Adams’ absence was missed sorely down back as Richmond took numerous marks that probably wouldn’t have been allowed had Adams been present. Ryan Lester was no match for Riewoldt.

Chol brings out the tricks

Mabior Chol kicked two of the best goals of the game. Late in the first quarter, he converted a set shot from 48m out on the boundary line, which swung back beautifully to give the Tigers a 13-point lead. And just before time-on in the second term, after the ball evaded him and Jack Payne as they were grappling each other in a marking contest at the top of the goal square, Chol brilliantly soccered it home as he fell to the ground.