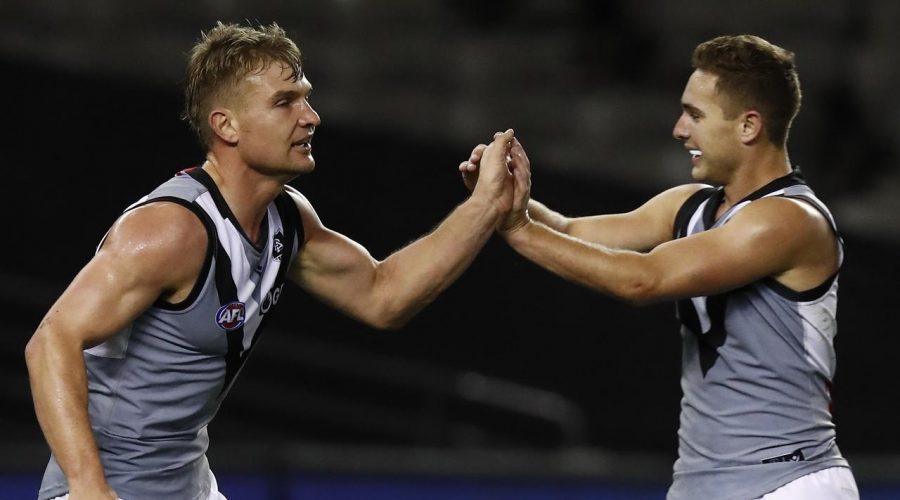 An undermanned Port Adelaide pulled off a 13-point win against the odds against a St Kilda side hoping to jump into the top-eight.

The Power, missing a host of their best players, will end the round inside the top four thanks to a four-goal performance from teenage sensation Mitch Georgiades.

St Kilda would have finished the round inside the top eight had they won, but despite winning the territory battle couldn’t capitalise on their forays forward.

St Kilda dominated general play and territory in the first quarter, but the contest was befitting of the atmosphere as both teams struggled to click into gear offensively.

A couple of left-footed goals from Jack Steele and Dan Butler made sure St Kilda took a deserved 10-point lead into the first break, despite not fully capitalising on a 15-7 inside 50 count in their favour.

Port managed to turn the tide in the second term and if not for inaccuracy could have put more space than seven points between the sides heading into the main break.

Brownlow fancy Ollie Wines was the Power’s most important player around the ball, while Karl Amon, who could feature in All-Australian discussions, kicked two second term goals.

A putrid display of goalkicking meant it took until 15 minutes into the third quarter for a goal to be kicked, courtesy of Boyd Woodcock.

And as is often the case, only a minute later Rowan Marshall answered with a flying snap that bounced through to cut the margin back to one goal.

The goal-for-goal battle continued when Georgiades kicked his third goal for the game in time on, but was broken when Wines soccered a goal through to give his side a 19-point advantage.

Jimmy Webster nailed a 50-metre bomb in the shadows of three-quarter time to bring his side back within 14-points, before a missed throw by Dan Butler resulted in a Max King goal to trim the margin to just eight points at the final change.

A goal just three minutes into the last quarter to Rowan Marshall cut the margin to just a point as they looked to have all the momentum.

But a steadier to Mitch Georgiades, who was the best forward on the ground, extended the Power’s lead back out to seven-points.

A late goal to Charlie Dixon, who had been well held all day, sealed a 13-point Port Adelaide win.

Jimmy Webster is one of the Saints’ most improved players in 2021 and has been a huge part of their watertight defence since they turned their form around.

The 28-year-old played a key role in blunting the Power’s attack, and by halftime had already made five intercepts.

Not only was Webster damaging with his intercept play, but his ability to get the Saints going forward was vital. To go with three score involvements to halftime, Webster had 227 metres gained and 13 disposals.

A third quarter steadying goal was the polish on Webster’s 22 disposal performance.

Max King must hate seeing the Power on the fixture.

In the two sides’ previous game this season King was held to just two kicks and one behind, and Trent McKenzie made sure the budding superstar forward had no influence on the game.

At halftime McKenzie had not only kept King to four touches and one behind but had a game-high nine intercepts to go with 14 touches and 305 metres gained.

A fortuitous goal late in the third term to King added some respectability back into the matchup for King, but McKenzie finished with a game-high nine intercepts.

Brett Ratten praised Daniel McKenzie leading up to the game, but the improved winger was stretchered off after a sickening incident in the second quarter.

McKenzie tried to stop a certain Port Adelaide goal with a big tackle on Mitch Georgiades, but his legs went from under him and the Power forward’s complete weight landed on McKenzie after his head smashed into the turf.

He played no further part in the game.

McKenzie is the latest Saint struck down by injury in 2021 (Photo by Michael Willson/AFL Photos via Getty Images)Source:Getty Images

The question for Port was always going to be who was going to kick the goals with Rozee, Butters and Gray out.

Georgiades was by far and away the best forward on the ground and finished with four goals.