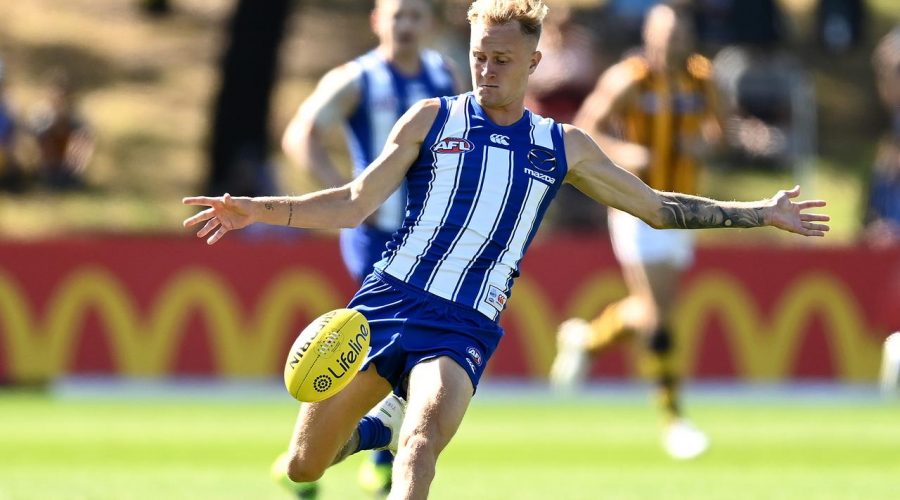 Jaidyn Stephenson headlines three new players set to play for North Melbourne in the opening round, but gun midfielder Ben Cunnington remains on the sidelines.

Seized upon by the Kangaroos after being unwanted at Collingwood, Stephenson will be joined by former GWS defender Aidan Corr and Lachie Young, who moved from the Western Bulldogs, in the team to play Port Adelaide on Sunday.

New coach David Noble, in his first premiership match in charge, said the trio all brought something different to the team.

“They’ll all play. It’s great for those guys. The club worked hard to get those guys through the trade period and they’ve all displayed some really good traits in the areas they’ve played in,” he said on Friday.

Noble said there was also potential for a “debutant or two”, with draftees Tom Powell, Will Phillips and Phoenix Spicer all in the mix to play.

But Cunnington, who played just three games in 2020 because of back issues, isn’t ready to play after missing crucial pre-season hit-outs because of concussion.

“He’s in the clear with concussion symptoms, but it’s more about reloading,” Noble said.

Jaidyn Stephenson, Aidan Corr and Lachie Young will all make their North Melbourne debuts on Sunday 👏💙

The good news for the first-gamers was mixed with some bad news for young defender Flynn Perez, who has been ruled out of this season after suffering another serious knee injury at training.

It will be a second knee reconstruction for Perez, 19, who broke through to play the final three games last season.

“This is obviously devastating for Flynn being his second reconstruction,“ North Melbourne football boss Brady Rawlings said in a club statement.

“Flynn’s attitude has always been first class, and we have no doubt that he will return in great shape and have a real impact for us in the years to come.”