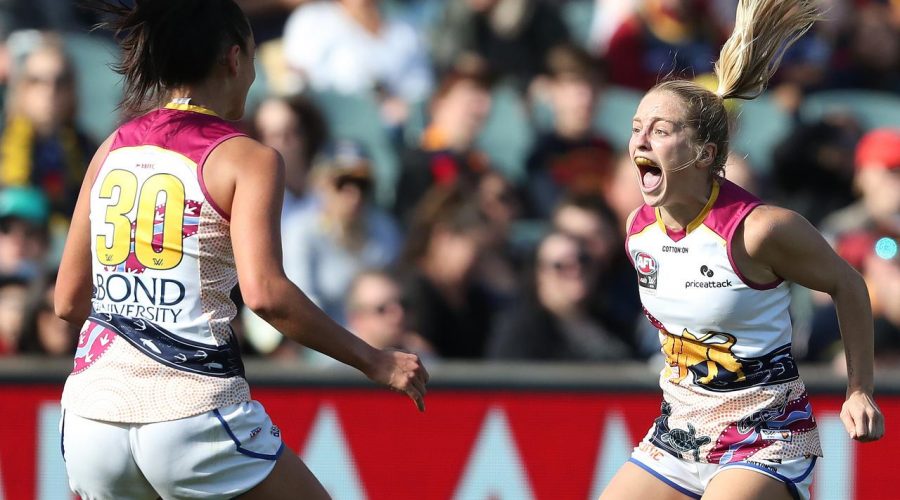 The Lions, contesting their third grand final, made a gutsy stand in defence to triumph by 18 points at Adelaide Oval on Saturday and live up to the words on their banner which had read ‘Time To Level The Score’.

The Crows completely dominated territory with twice as many trips inside their 50m, only to waste opportunity after opportunity in their pursuit of a third flag, the first of those after beating the Lions in the 2017 grand final.

However, the Lions’ ability to pounce on their chances proved decisive.

The Lions were first to settle amid the intense pressure of a premiership decider and they had the Crows under the pump early.

The Lions had a massive territorial advantage early and they set up nicely, preventing the home side from escaping from its defensive zone.

When the Crows did go forward and looked dangerous, they too often picked out a lone Lions defender and wasted opportunities. The Crows had just one scoring attempt from 10 visits inside their 50m.

The Crows were able to arrest the early onslaught from the Lions and after winning the inside 50 count 10-6 for the first quarter, dominated that statistic for the second.

Such was their control of the territory, the Crows had 12 visits inside their 50 for the second term compared to just four for the Lions.

Yet that supremacy failed to be reflected on the scoreboard, adding 1.1 while the Lions made the most of their chances to bag two goals for the quarter.

The first of those goals was a stunning effort from Courtney Hodder. After the ball was banged deep into attack by the Lions, Hodder lashed out with her foot and made perfect connection to soccer the ball through for a major.

There was no more evidence of the trend of the game than six minutes into the third quarter when Jessica Wuetschner nailed her second goal.

The Crows had been camped in attack, but could not capitalise.

The Lions rushed the ball forward for a rare foray into attack and Wuetschner kicked the ball from 50 into a vacant goal square. The ball kept bouncing and eventually through for a goal to put the Lions 10 points clear.

Both teams lost their captains to injuries in the third quarter.

Just seconds after Emma Zielke left the game due to a hamstring issue, her Crows counterpart Angela Foley limped from the field after collapsing to the ground holding her knee.

Foley led the Crows onto the ground after regular skipper Chelsea Randall was ruled out of the game after being concussed in the preliminary final win.

Randall spoke to the Crows at three-quarter time while standing outside the boundary line, hoping to inspire the comeback.