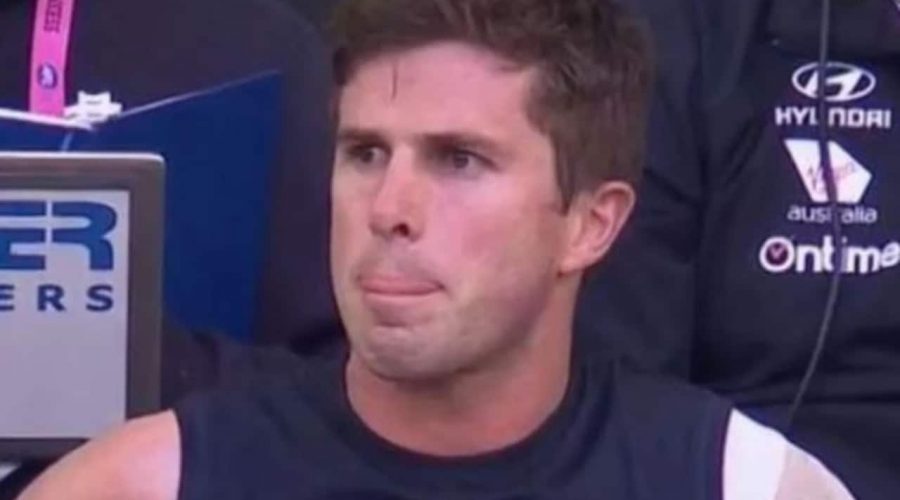 Marc Murphy’s chances of becoming the sixth man to play 300 games for Carlton have hit another wall, with the former Blues captain overlooked for selection this weekend.

Murphy has been named as an emergency substitution for this weekend’s clash with North Melbourne but could still feature in the side as the medical sub.

Given Carlton’s finals hopes are slim, unless Murphy is named the medical sub for Saturday, he will need to either play in all of Carlton’s games from round 20 or sign a new deal for 2022 in order to reach 300.

Murphy recovered from a calf injury suffered against Adelaide last month and is hoping to join Stephen Silvagni, John Nicholls, Kade Simpson, Bruce Doull and Craig Bradley as a member of the Blues’ illustrious 300 club.

Murphy’s teammate Patrick Cripps returns to the side this weekend after missing last week’s win over traditional rivals Collingwood through soreness.

Meanwhile, Essendon’s Dylan Shiel will make his long-awaited return when the Bombers face his old side, the Giants, at Metricon Stadium.

A serious knee injury has kept Shiel out of the senior side since round two.

Elsewhere, luckless Port youngster Zak Butters is set to take the field this weekend after spraining his MCL during his first game back from injury in round 17. Injuries have restricted the hot young prospect to just five games this season.

Connor Rozee, another of the Power’s young guns, is also set to return from injury for this weekend’s game against Collingwood.

Key forward Josh Kennedy is one of a handful of Eagles back in action this weekend. Injuries have cruelled West Coast’s 2021 campaign, so the Eagles faithful will be pleased to have Xavier O’Neill, Jake Waterman and Mark Hutchings out of the casualty ward and into the fray against St Kilda.

Kennedy missed the Eagles’ win over Adelaide in round 18. (Photo by Daniel Carson/AFL Photos via Getty Images)Source:Getty Images

The Tigers have been similarly unlucky on the injury front in 2021, but welcome back Callum Coleman-Jones, Hugo Ralphsmith, Josh Caddy, Riley Collier-Dawkins, Shane Edwards for this weekend’s bout with the Cats.

Gary Rohan returns to the fray for the Cats after missing last week’s win over Fremantle. His forward line compatriot Jeremy Cameron is still a few weeks away, however, coach Chris Scott says the former Giant will return to the side “before the end of the home and away season”.

With the side’s finals hopes on the line, the Dockers will be thankful that star ruckman Sean Darcy has overcome a knee injury to take the field this weekend. In last week’s heavy loss to Geelong, Darcy was a shining light for Fremantle and coach Justin Longmuir will be looking for another big effort against fellow finals contenders Sydney this weekend.

Connor Blakely, Hayden Young and Matt Taberner are among the other Dockers back in the 22 this weekend.

Lions star Lachie Neale has overcome a stinger suffered at training in the week and will take his place in the second QClash of the season.

Joining him are Jarrod Berry and Callum Ah Chee, who come into the side in place of Jazon Prior and Keidean Coleman.

AFL ROUND 19 TEAMS (All times AEST)

OUT: Coleman, Prior (both omitted), T.Berry (sub)

OUT: Ellis, Holman (both injured)

B: Salem, May, Petty

OUT: Martin, McIntosh (both injured)