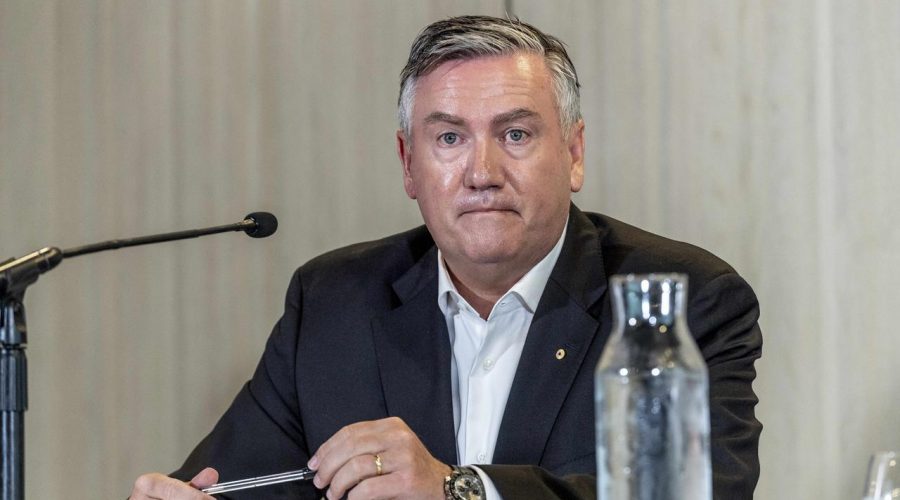 Former Collingwood president Eddie McGuire has further explained his report around the AFL’s concerns over Chris Scott’s behaviour in the coaches box.

But McGuire says he has great sympathy for the Cats coach and the high expectations Cats fans place on him, cheekily suggesting if Scott was handing out gold bars on Geelong’s main street, “people would complain they were too heavy”.

McGuire reported last week umpires and the AFL were “not happy with the constant theatrics” and “constant demonstrative attack on the umpires while the game was being played” from Scott, who accepted a $10,000 suspended fine for exchanging words with Brisbane players during a Round 2 game.

Scott responded on Monday night, claiming he’d never been pulled up for being too demonstrative in the coaches box or towards umpires. He claimed McGuire “made that part up” because the Cats coach’s strong relationships with people at the AFL meant any grievances would be shared with him before, or as well as, McGuire.

Speaking on Channel 9’s Footy Classified on Wednesday night, McGuire insisted he and Scott “get on very well” and have great respect for each other.

While being understanding of Scott’s scepticism around the comments, McGuire said he and Scott had different close contacts at AFL headquarters.

Eddie McGuire and Chris Scott after the 2011 Grand Final.Source:News Limited

“I agree with what Chris Scott said partly,” McGuire told Footy Classified. “He hears from Steve Hocking, who’s a very close friend of him, they work together. His brother (Brad Scott) works at the organisation. But that’s at that area.

“I speak to other people. My phone was going off, I didn’t go soliciting … from senior AFL people going: ‘Are you watching this? They’re going off again.’ So that was where I came from.

“And let’s not forget, those great friends of his still gave him a $10,000 suspended fine the next day.

“My point is, there’s no battle going on with these situations … I’ve got a lot of respect for Chris.”

McGuire said he felt sorry for the Geelong coach, who has often had his position criticised despite regularly leading the Cats to finals football each year.

“I feel for him sometimes at Geelong. If they win, it’s (Patrick) Dangerfield and (Joel) Selwood and everyone else. If they lose, it’s the coach,” McGuire said.

“He took over a club that was just about shot when we (Collingwood) fixed them up in the 2010 preliminary final. The next year, beat us three times, won the flag.

“Not only that, but by getting to the finals all these years — OK, you don’t win them all because they’re hard to win — he has helped Geelong set up the redevelopment down there, their membership — everything.

“I think he sometimes feels that if he was handing out gold bars … in Ryrie Street, people would complain they were too heavy.”

Originally published asEddie responds to being called a liar