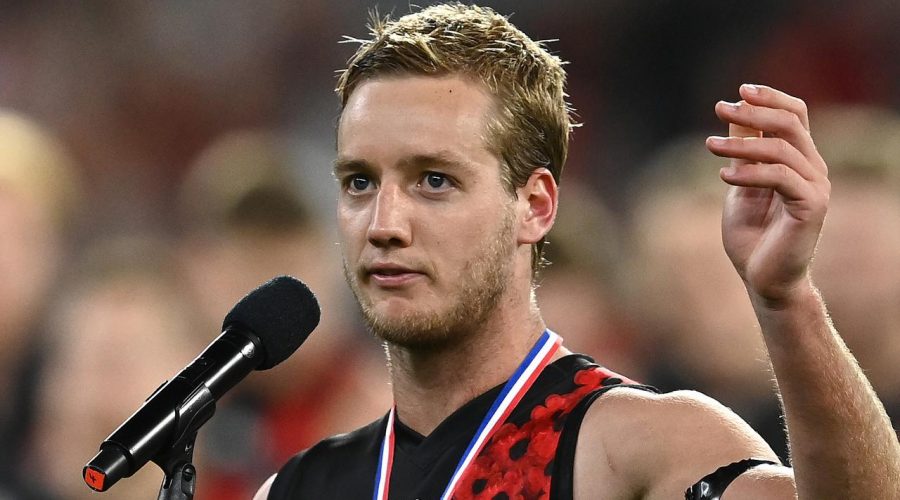 Essendon on-baller Darcy Parish has credited increased fitness levels achieved over the pre-season, and some unfortunate injuries to fellow midfielders, with his ability to produce the best form of his career this year.

Just three weeks after registering a personal best 34 disposals against St Kilda, the 23-year-old took it up a notch against Collingwood on the biggest stage of the home-and-away season to rack up 42 touches to be best on ground in his side’s 24-point win on Anzac Day.

Parish’s career has been a bit of a slow burn, but as he prepares for his 100th game next week, the former No. 5 pick appears to finally be realising his full potential as he plays more regularly in his natural position.

“My running really went up this pre-season,” Parish said post-game.

“I think my running capacity has gone through the roof which has allowed me to get to more contests and cover the ground a lot better.

“Obviously when ‘Shiely’ (Dylan Shiel) and ‘Calders’ (Jye Caldwell) went down against Port Adelaide there was obviously a bit more opportunity there for me to step up and play a little bit more midfield.”

Parish won his first Anzac Day medal, and he was chuffed to be adding his name to a long list of champions to have earned the honour such as James Hird, Scott Pendlebury and Dane Swan.

“It’s obviously a huge honour, I watched these games since I was little kid obviously barracking for Collingwood and idolising (Scott) Pendlebury and the like,” he said.

“It’s a real honour and a privilege to play on the day but at the end of the day we’re here to get the win.”

The win all but dashed Collingwood’s finals hopes.Source:Getty Images

But victory didn’t look completely assured for the Bombers for much of the day.

Collingwood even got their noses in front early in the final term, but Essendon coach Ben Rutten was pleased with how his team responded to that challenge.

“I think we showed a bit of maturity in that last quarter when we needed to,” Rutten said. “It was another little step forward for our group.”

Rutten also believed playing in front of such a big crowd would hold his young group in good stead.

“We’ve had nine guys playing their first Anzac Day game … so many players will be able to take a fair bit out of this game,” he said.

Anthony McDonald-Tipungwuti was also one of Essendon’s best with five goals.

“We love seeing his pressure and his defensive skills, I think that’s the thing that really ignites the whole group, but to get some of the finishing and class in front of goal was great tonight … he’s got so much natural ability,” Rutten said.

Meanwhile, Rutten was unsure as to the severity of Aaron Francis’ sprained ankle. The defender, who started the game well on Darcy Moore, had to be subbed out and replaced by David Zaharakis in the second quarter.