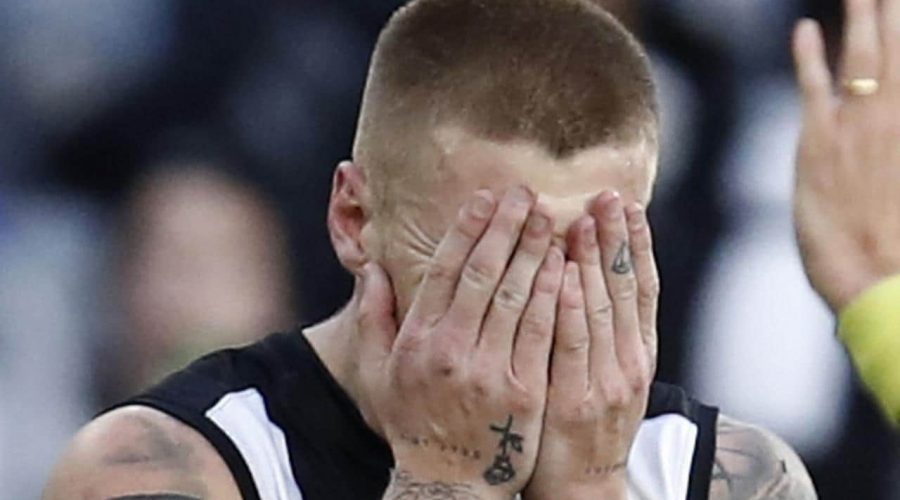 St Kilda’s unlikely bid for finals footy this year has a pulse after the side survived a major final-quarter scare against Collingwood at the MCG on Sunday.

After only managing three goals in the opening three quarters, and falling 49 points behind, the Magpies’ woke up in spectacular fashion to kick the final six majors of the game to trim the margin to eight points.

But Collingwood left its run too late, and the Saints held on for a nine-point win after being the better side for the majority of the day.

A third-quarter blast from St Kilda ultimately proved decisive against a Collingwood team that cut a dispirited unit before the final quarter.

After a scrappy, uninspiring but tight first half, which saw the Magpies restricted to just 1.5.11 – their lowest half-time score against the Saints since Round 15, 1963 (1.1.7) – the Saints did as they pleased in the third period, cracking the contest wide open with six goals to two. The Magpies barely gave a yelp and played like a side whose season had lost all meaning with a caretaker coach at the helm.

At one point, St Kilda kicked seven goals in a row, with the Magpies having to wait 93 minutes to kick their second goal.

Collingwood gave up the fight in the third term – the side’s resistance evaporated and it wasn’t prepared to take the game on as much as the Saints did on the open expanses of the MCG.

St Kilda continued to dominate the territory with double the Pies’ inside 50s (18-9). But Harvey’s men turned things around dramatically in the final term to give the Saints a decent fright.

St Kilda is now just half a game, and plenty of percentage, outside the top eight with seven games to go. Granted, the Saints’ run home features meetings with top-eight sides Brisbane (away), Port Adelaide, West Coast (away), Sydney and Geelong (away), but where there’s life, there’s hope.

Encouragingly, Brad Hill’s speed really stood out in the contested style of game. The maligned big-money recruit’s previous season-high was 27 disposals, and he already had 14 at quarter-time, before finishing with 30 touches and 689 metres gained.

A fourth quarter fightback put the lead within reach, but the Pies had left it too late. (Photo by Darrian Traynor/Getty Images)Source:Getty Images

Jack Steele already had 11 tackles in the first half, and looked on track to break the record of 19. He would end up with 14 and continued his standout season for the Saints with another influential performance, which also included 36 disposals (14 contested), eight clearances, three goal assists, seven score involvements.

Hungry Saints get it done

Ultimately, St Kilda’s superior appetite for the contest, which was apparent mainly in the opening three terms, proved crucial, as the side ended up winning the clearances 40-33, tackles 70-59 and contested possessions 142-132.

A bizarre moment occurred late in the first quarter when Collingwood ruckman Brodie Grundy took a mark and handballed it away on the Saints’ half-forward flank. The umpire then blew his whistle, prompting Steele Sidebottom to leave the ball on the ground. It allowed the Saints to swoop, and the ensuing chain of possessions ended up with Dan McKenzie kicking a goal.

Not a happy hunting ground

For the first time since 1999, Collingwood has lost six games in a row at the MCG. The side has also lost eight of its last nine at the venue.