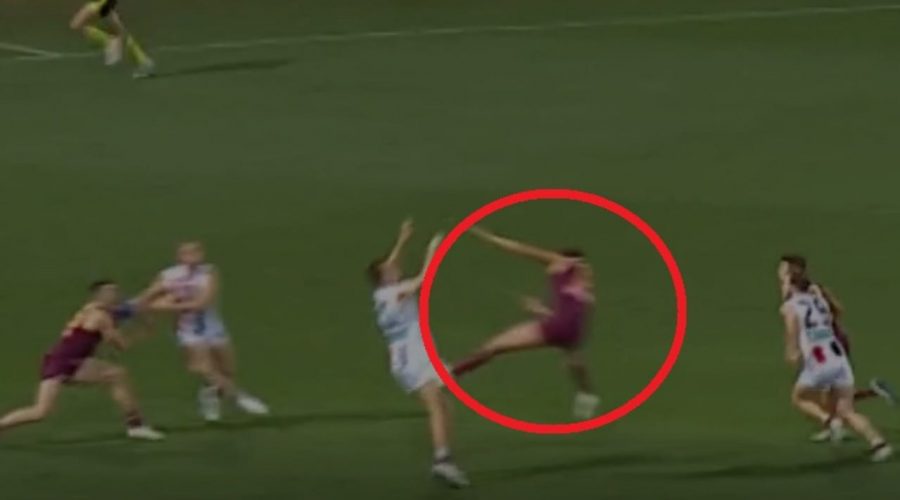 Brisbane’s Joe Daniher has again been slammed for diving, during the Lions’ loss to St Kilda on Saturday night.

The key forward heavily exaggerated contact from Saints defender Dougal Howard, flying forward towards the ground in an attempt to gain a free kick for push in the back.

It’s not the first time Daniher has staged for free kicks this season.

The 27-year-old came under fire from footy fans and experts in the round 15 match against Geelong after falling to his knees inside 50 during the second term, earning a dubious free and kicking his second goal of the night as a result.

He was subsequently charged with staging by the AFL’s match review officer after appearing to milk the free kick against the Cats.

The umpire didn’t award a free kick on the most recent occasion but former AFL players are urging Daniher to eradicate the habit from his game before it starts to tarnish his reputation.

“There’s one thing that’s really annoying me with Joe Daniher at the moment and I think the coach has to step in,” dual North Melbourne premiership player David King told Fox Footy’s First Crack.

“This is unacceptable, we don’t want to see that.

“Get that out of your game Joe because it’s not what you want to be remembered for and it’s not what the Brisbane Lions need right now.”

After fellow key forward Eric Hipwood suffered a season-ending ACL injury on Saturday, King said there is added pressure on Daniher to clean up his act as he shoulders more of the load in the Lions’ front half.

“This has to stop, because he’s going to be the man now. Hipwood’s not down there anymore,” he said.

“They need all their focus to be on the contest and standing under a pack or two.”

In his first season for Brisbane since being recruited from Essendon, Daniher has played in all 16 games this year and kicked 27 goals.

“He’s been a great acquisition for them but he’s going to have to go next level in the back half of the year to replace what Eric’s been providing.

“Not just the goals but the contest work, bringing the ball to ground and sacrificing your body for the team at time.”

Joe Daniher has been criticised for diving on two occasions this season. (Photo by Dylan Burns/AFL Photos via Getty Images)Source:Getty Images

“If you’re not embarrassed by the first one, you’re humiliated by this one.

“As a player, if I was watching that, I’d be that embarrassed.

“The fact is, Chris Fagan does have to step in and go: ‘Mate, what are you doing?’”

King urged the AFL to come down harder on Daniher for diving.

“I don’t know what the answer is, I don’t have the answer but I think the coach needs to take control of this.

“In my opinion, if the umpire sees this and says: ‘you’ve dived’, pay a free kick.

“Pay a free kick against Daniher because this is not what we want. He’s trying to stooge the umpire.”