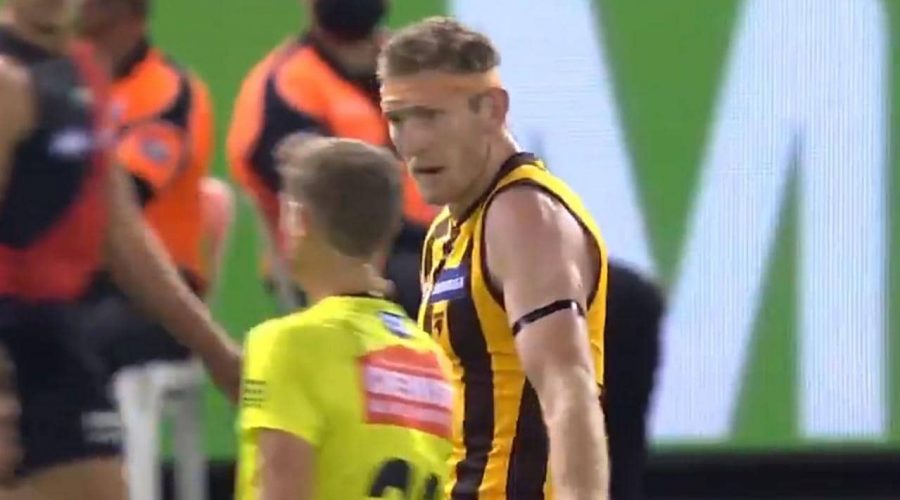 Ben McEvoy had the commentators in hysterics and awarding him the “best comeback of the year” after a perfect reply to a lineball free kick in the Hawks’ win against Essendon.

The Hawthorn ruckman, under close pressure from Bombers midfielder Andrew McGrath, bent low and swiped at the ball with his paw to keep it moving midway through the third quarter of a thrilling one-point win.

He lifted it about half a metre off the ground and from the point of view of field umpire Robert Findlay it looked like a throw so he blew his whistle.

The umpire awards a free kick to Essendon.Source:Channel 7

McEvoy was bemused and immediately protested. Findlay explained “I thought you threw it out”, which prompted a lightning-quick retort from Big Boy.

“Mate, I literally tap it for a living!” he said.

It was just the start of the great comebacks as Hawthorn came from 40 points down to beat the Bombers by a point.

At halftime, the AFL was already wondering where the Hawks would put their wooden spoon after an uninspiring first half that saw the sides go to the break with the Bombers leading 10.6 (66) to the Hawks’ 4.3 (27), with the lead as bad as 40-points in the second quarter.

But in an incredible turnaround, the Hawks erased the deficit in the third quarter as the teams battled for the victory down the stretch with Hawthorn hanging on for a 14.8 (92) to 13.13 (91) win.

Tom Mitchell was the best on ground with 39 disposals for the Hawks, including 17 in the third quarter when he got his side back into the contest.

But the game went right down to the wire with Devon Smith booting the Bombers ahead with two minutes left, before Tim O’Brien’s mark and snap stole the result for Hawthorn in brilliant start to the year.