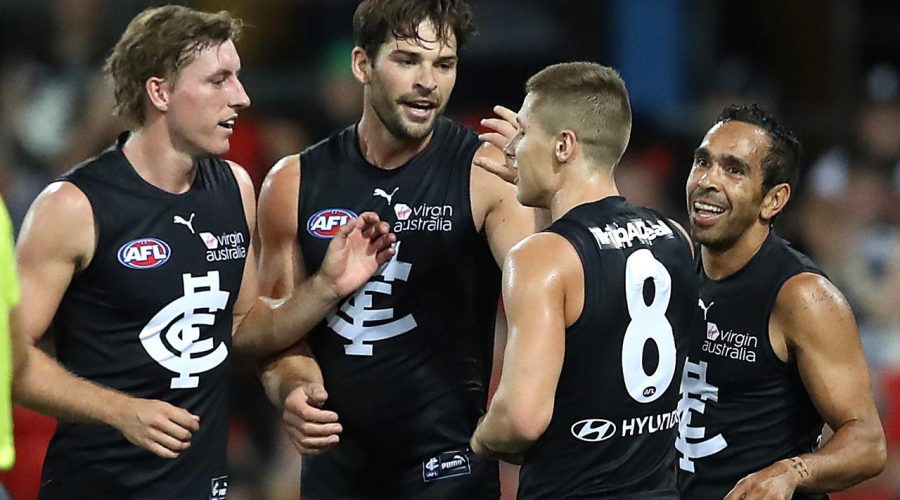 Hawthorn legend Dermott Brereton has urged David Teague to revitalise his lukewarm Blues by dropping three veterans to the VFL.

“I’m just a little critical that they seem to drop the same young blokes each time and as I said on Saturday morning, they’ve been very kind to some of their players,” Brereton said.

However, as the Blues hope to play finals footy for the first time since 2013, Brereton said Teague should not feel obliged to select the trio each week, despite the fact they have played over 600 games between them for the club.

“What you want from your half-forward flankers, he can’t give that anymore. He’s got to be on the inside.”

Carlton will hope to make amends for its slow start to the year against Essendon in round seven.Source:Getty Images

Carlton has won two of its first six games this season, leaving fans to worry that 2021 could be yet another year without their team playing September footy.

The Blues faced scrutiny after their round five loss to a depleted Port Adelaide outfit, during which the side was booed off by its own fans at three-quarter time.

Carlton’s rebuilding phase under list manager Stephen Silvagni put the club in pole position to pick up quality talent during the drafts from 2015 to 2019.

In that time, the Blues used 15 top 30 draft picks but only a few of those players have gone on to play consistent AFL footy, leaving the club’s fortunes in limbo.

But Teague is not giving up on the hot-and-cold Blues.

“I have absolute belief in this group, we’ll get there,” Teague said earlier this season.

“I am not going to lose any belief in this group. I know our fans will probably be a bit frustrated … they’re disappointed, we all are.