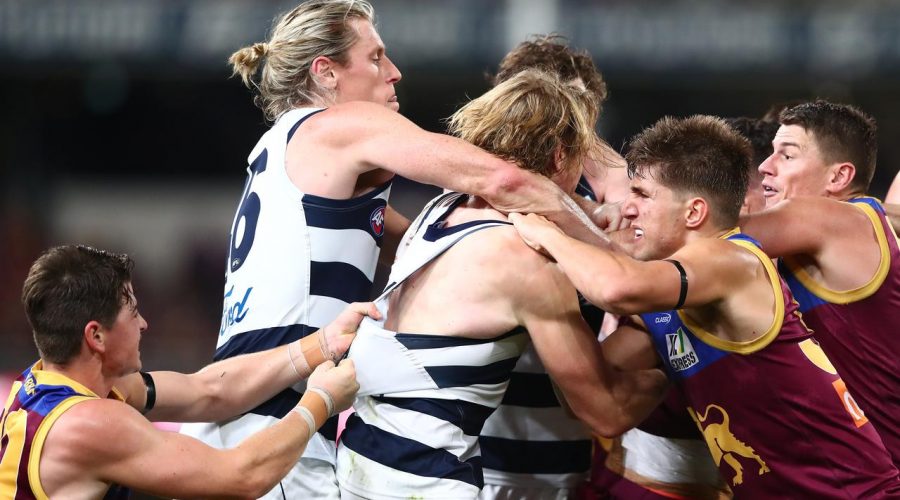 Geelong and Brisbane’s hostile relationship continued with a spiteful opening half at the Gabba.

There were spot fires everywhere with Cats All-Australian defender Tom Stewart and Lions star Charlie Cameron in the thick of the action in the second quarter.

Stewart was penalised a 50m penalty for dragging Cameron down after he’d been awarded a free-kick.

In the opening term a hard Jeremy Cameron tackle on Brownlow Medallist Lachie Neale sent shockwaves through the Lions camp.

Players from both sides got in on the act after the incident. Picture: Chris Hyde/AFL Photos/via Getty ImagesSource:Getty Images

Neale appeared to have suffered a serious shoulder injury and was immediately taken downstairs by the club’s medical staff.

But he returned after just a couple of minutes and while favouring it initially he played out the rest of the half.

The two sides have history with the round 2 clash at GMHBA Stadium highlighted by a verbal clash between the two coaches, Chris Scott and Chris Fagan, which lingered after the game.

Brisbane were robbed of victory that day with a non-decision denying them an easy goal in the last few seconds. The Lions seemed like a team on a mission in the first half, racing away to a 34-point half-time lead.