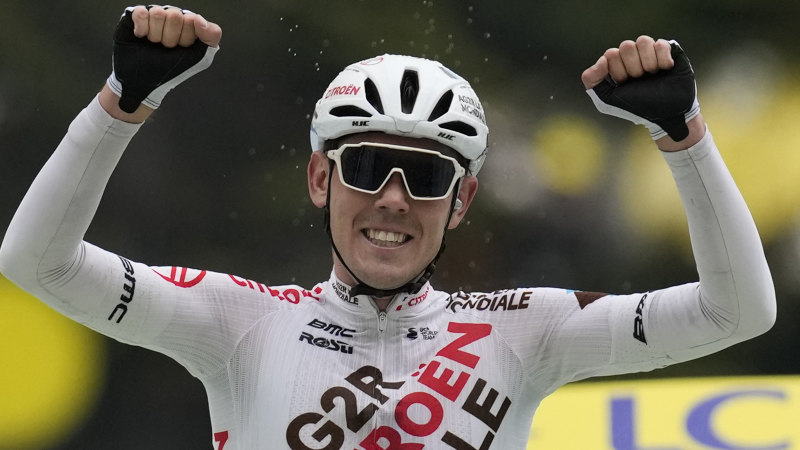 Australian cyclist Ben O’Connor has been the revelation of this year’s Tour de France and could be set for a podium finish in the coming years if he is surrounded by the right people, says Australian cycling legend Phil Anderson.

The 25-year-old West Australian caused a shock when he crossed the line first on the stage nine mountain-top finish in the Alps, and has showed courage and class since to remain in the top five overall. O’Connor is fourth in the general classification, trailing leader Tadej Pogacar by 8 minutes and 18 seconds going into Saturday night’s key individual time trial. 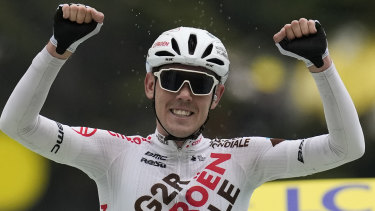 Australia’s Ben O’Connor celebrates as he crosses the finish line to win the ninth stage.Credit:AP

While a top three finish appears out of reach, O’Connor could become just the fourth Australian to finish in the top five of the Tour de France, behind Anderson, Cadel Evans and Richie Porte.

To put his debut into perspective, Australia’s only winner of the Tour de France, Evans, finished eighth in his debut in 2005 at the age of 28.

O’Connor has all the attributes to win a grand tour, says Anderson, however, much will depend on who is around him in the coming seasons.

“As a rider, he’s 25 so he’s not young but he still needs to be looked after,” Anderson said. “When you have that talent on your first Tour, it has to be tempered to be managed well. He has to be surrounded by the right people, the right team. It’s very exciting.”

In 1981, Anderson became the first non-European to lead the Tour de France and claimed two fifth overall finishes in his career. Since then, six other Australians have worn the yellow jersey at least once and Anderson believes O’Connor can become the seventh and, within the right environment, even ride into Paris wearing it.

“This is his first attempt so who knows where he’ll be in five years?” Anderson said. “He’s ridden to the top, he’s won a stage and he’s up there every day and not far behind Pogacar. It’s amazing to think, and he does have the talent, but it’s still too early to put money on him. Certainly, he’s very promising and it looks like he’s got a price on his head now that people will take the gamble and prepared to have him as their leader.”

With Pogacar still far from his prime at just 22 years of age and on course to claim his second successive title in France, O’Connor won’t be fancied to displace the Slovenian any time soon. However, at AG2R Citroen – where he has recently re-signed until 2024 – he has the chance for a top team to be built around him. If that happens, the odds will shorten of the Fremantle rider winning a grand tour, either in France, Spain or Italy.

While O’Connor has signed a long-term deal, his performances in his debut Tour de France will only raise his value and have many looking at O’Connor as a lead rider.

“This year with his program, he wasn’t seen as a real contender,” Anderson said. “He was doing a few events leading up to the Tour de France, whereas riders that come in as leaders, their whole season is built around the Tour de France.”

Riders race the clock in the individual time trial on Saturday night before the event finishes with a flat stage into Paris on Sunday. It doesn’t give O’Connor, a strong climber, much chance to make up much ground on Pogacar, Jonas Vingegaard or Richard Carapez in the top three. However, if he meets expectations and finishes in the top five, his debut could be the perfect platform for a future podium finish.

July 17, 2021 Cycling Comments Off on Best is yet to come from Australian Tour de France sensation: Anderson
NFL News