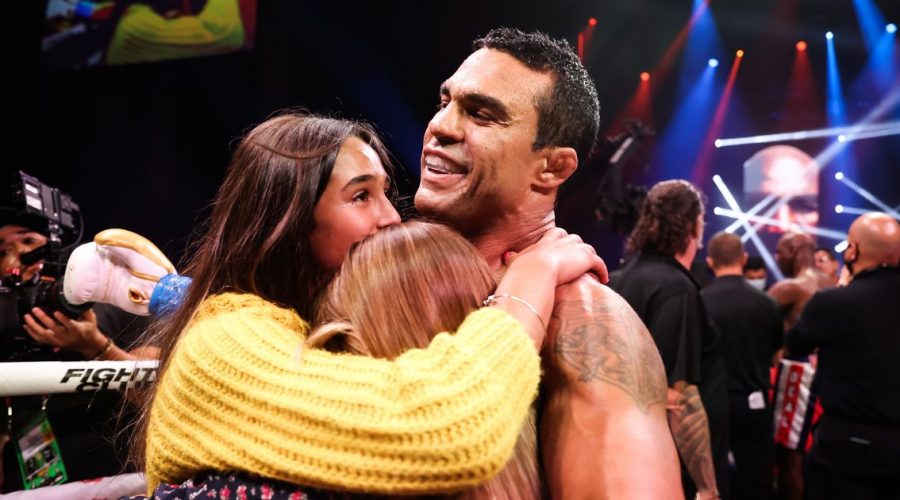 The legendary MMA fighter brutally stopped former world heavyweight champion Evander Holyfield in the first round of their exhibition bout in Florida last night, and immediately made the offer to YouTube star Paul.

The social media sensation has worked with Belfort's promotion Triller Fight Club twice before, but the relationship seems to have soured.

And Belfort made the call-out immediately following his bout, with the promotion willing to put up a massive cheque to lure Paul back to to their ring.

"We've got $25million," Belfort said during his post-fight interview. "Winner takes all! Let's go Jake Paul, stop running from me.

"You better start training, all of your fans are going to be Vitor Belfort fans. I've got family, you don't have family… America needs me, not you!"

Triller boss Ryan Kavanaugh took the microphone after Belfort's interview to offer an even bigger $30m purse to Paul while proposing a potential date on Thanksgiving weekend.

The bout would take place on November 27 if Kavanaugh and Triller have their way, with the film producer turned boxing promoter claiming that if Paul doesn't take the bout fans will "know why".

Paul has beaten two MMA legends in his last couple of matches, first stopping Ben Askren within a round of their April fight night on Triller Fight Club's platform.

But his most impressive career scalp came last month when he took a split decision victory over former UFC welterweight champion Tyron Woodley in his hometown.

And unfortunately for Triller and their owner Kavanaugh, the bout seems unlikely, as Paul edges ever closer to a December showdown with Love Island star Tommy Fury.

Do you want to see Jake Paul fight Vitor Belfort later this year? Let us know i n the comments!

The pair clashed after winning their respective bouts in Cleveland, and Mirror Fighting sources have indicated that talks are moving forward for a date before the end of the year.

"I think Tommy Fury is at the top of that list," Paul told the 'Full Send' podcast this week when asked about his potential opponents.

"He’s skilled, he’s undefeated, and he’s a real boxer. He has like four million followers on Instagram which is good engagement. He has the fans from his relationship show [ Love Island ].

“It all starts with the numbers, like would the fight sell a lot? Would people actually care? I could go and fight the infamous jiujitsu guy who doesn’t shut the f*** up on social media, but it’s a hard sell.

"This guy just beat a UFC hall of fame legendary striker, we’re not going to put him up against a jiujitsu guy in a boxing match.

“So after each fight, we go back to the drawing board and we’re like ‘who makes the most sense’ ⁠— can they actually sell pay-per-views? Can we sell this fight as like ‘this is a tough fight for Jake'."