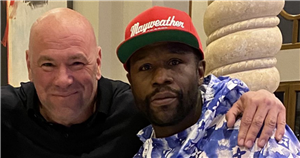 UFC chief Dana White has teased that Floyd Mayweather Jr could be once again collaborating with Rizin Fighting Federation after being spotted with president Nobuyuki Sakakibara.

Mayweather beat current Rizin Kickboxing featherweight world champion Tenshin Nasukawa during an exhibition bout back in 2018 – which ended after just 40 seconds of the first round.

Japanese businessman Sakakibara launched the fighting federation in October 2015, with White’s presence an unexpected bonus to his meeting with the iconic boxer.

When posting the snap on Twitter and causing an excited reaction among his 5.6million followers, White used the caption: “HOOOOOOOLY S***!! WTF is goin on here.”

Sakakibara then tweeted: “When I was having a meeting with Mayweather, I was surprised when Dana appeared when I was told, 'I have a guy who wants to see Sakakibara from now on, so I'll call him by phone’.

"It's been about 15 years since I met him again [but he is] one of the guys I wanted to meet back in the industry. Something may be born by chance!"

Mayweather hasn’t fought professionally since he stopped Conor McGregor in style in 2017, with his plans over a postponed bout against YouTuber Logan Paul currently uncertain.

The boxer had said earlier in the year: “This year I will focus on several exhibitions.

“I also heard that 50 cent would fight me but claims I'm too small. If he wants to lace up at the end of the year, we can do an exhibition then.

“I don't care about weight class with any of these guys. The Paul brothers will make great money with the events, but with 50 cent It has to be "Winner Take All”.”

“I feel so confident. I don't know if I've ever felt more confident about anything in my life.