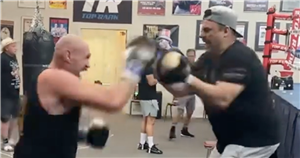 Tyson Fury appears to have posted a cryptic message about his proposed showdown with Anthony Joshua as negotiations over the date and location rumble on.

Fury and Joshua have already reached an agreement to lock horns in two mouthwatering heavyweight battles, which will likely crown the first undisputed king of the division since 2000.

All that’s left to be finalised is the site deal, with both fighters’ promotional teams initially setting a deadline of April 10 to wrap up the venue.

While that deadline expired last weekend, however, a number of site offers have reportedly been presented to Fury and Joshua.

The plan has always been for their first bout to take place in July, yet potential hosts are willing to front up more cash if it is rearranged for later this year.

Fury’s promoter Frank Warren believes it will be held in September, saying on talkSPORT: “I’m seeing all these various stories, ‘It’s gonna be Wembley on July 24,’ and so forth.

“But I don’t see how any of that can happen in July or even early August from my perspective.”

Warren then added: “I don’t believe this fight will go on until – if it’s late August we’ll be very lucky, maybe September.”

And in his latest post on Instagram, Fury appears to have hinted that Warren’s date prediction could in fact be on the money.

The Gypsy King, who is out training for the fight in Las Vegas ahead of Billy Joe Saunders’ meeting with Canelo Alvarez on May 8, uploaded a video which shows him looking rapid on the pads.

He captioned the video with a cryptic verse from the Bible that reads: “Have not I commanded thee? Be strong and of good courage; be not affrighted, neither be thou dismayed: for Jehovah thy God is with thee whithersoever thou goest.” Joshua 1:9 ASV.”

The name Joshua accompanied with 1:9 had fans suggesting Fury’s clash with the unified heavyweight champion could take place on September 1.

Nevertheless, Fury is also a passionate Christian, meaning the verse including Joshua’s name and a potential date could simply be coincidental.