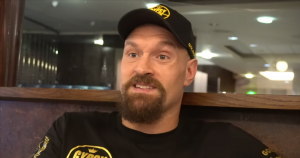 Tyson Fury has played down talk of his heavyweight clash with Anthony Joshua being announced anytime soon, instead claiming to be drinking “12 pints of lager a day” after bringing his training regime to a halt.

Fury and Joshua appeared to be on the verge of finally confirming their long-awaited meeting in the ring, which could crown a first undisputed heavyweight champion in over two decades.

Both fighter’s promoters have dropped hints in recent weeks that a deal is close to completion, yet now the Gypsy King has poured cold water on that being the case in a worrying interview with iFL TV.

“Whatever they say is very unimportant to me because, until I have a fight date and a hell-of-a-lot of money in my pocket, there is no fight,” Fury said.

“Will I be fighting Joshua in the next ten minutes? No. Do I think the fight will eventually happen? Yes, it has to happen. Do I think it is next or imminent? No.

“I am not going to hold my breath for it, that’s for sure.

“I am not going to put all my eggs in one basket because I have been guilty of doing that before and, when the fight doesn’t happen, that is when I end up in a massive depression and feel like killing myself.

“I am not going to say ‘it is definitely happening in June or July’”.

Fury has been out of action since his dominant win over Deontay Wilder back in February 2020, which saw him batter the WBC champion from pillar to post before the towel came in round seven. The 32-year-old recently blamed Conor McGregor’s UFC defeat against Dustin Poirier on “inactivity”, but despite his own lengthy spell out of the ring ahead of a potential battle with Joshua, Fury claims to have ditched training for a beer marathon.

While he has a track record for teasing reporters, Fury added with a straight face: “I have stopped training at the moment, I am on holiday.

“I am drinking anything between eight, ten, 12 pints of lager a day, at the minute. But I am not eating so I am getting my calories through alcohol.

READ MORE:Chris Kongo opens up on 'hard moment' in boxing journey when he almost gave up career

March 12, 2021 Boxing Comments Off on Tyson Fury not training for Anthony Joshua fight and ‘drinking 12 pints a day’
NFL News