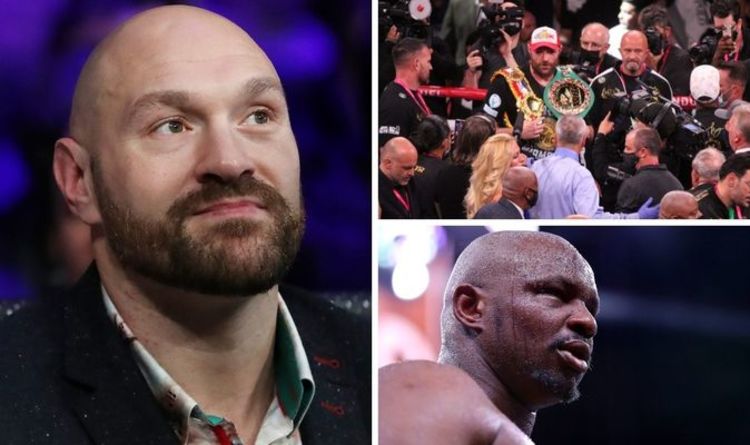 Tyson Fury 'has his mental health under control' says Paris

Talks regarding purse bids between WBC champion Tyson Fury and potential challenger Dillian Whyte have been delayed to January 18 as negotiations between the duo continue. World champion Fury has been ordered to fight Whyte next as his British rival is the WBC interim champion.

However, Whyte is reportedly unhappy with the tabled purse split that would see his British rival Fury take home 80 per cent of the earnings.

Frank Warren, the British promoter of Fury, announced the purse bid will now take place on January 18 – a week after the original date.

“First of all, the purse bid’s been pushed back by a week now. That was done [Saturday], so the purse bid will be seven days after so I think it’s next Monday or Tuesday,” Warren told talkSPORT.

JUST IN: Fury next fight date confirmed by Frank Warren with Whyte update

“As regarding the split, of course they’re entitled to an appeal. I don’t think they’ll get anywhere because purse bids are based upon boxers previous earnings.

“A situation in the last year I can think of is when Canelo fought against his mandatory at the time, Billy Joe Saunders but Billy had just done a deal.

“There was no way he was gonna get any 45 percent of a purse because the guy who generates the most money out the two of them is Canelo.”

Fury fought once in 2021, defeating American star Deontay Wilder via knockout in the 11th round of their grudge trilogy clash.

Whyte has been waiting to battle it out for Fury’s WBC title since winning the interim title in 2017 against Alexander Povetkin.

“Certainly when you’ve got a heavyweight generating the money that Tyson’s generating, there’s never gonna be that kind of split,” Arum said.

“That is not something that’s new, this has been this way for over 25 years at least. Most of the organisations operate this way and that’s what it is.

“They can make their appeal, nobody would in any way from our perspective say you can’t do that, but fact of the matter is I don’t think it will make a difference.”

The complications regarding the potential fight has opened up several avenues for Fury, who does not want another extended period out of action – and Arum revealed Andy Ruiz and Robert Helenius could fill in as opponents for the Gypsy King in non-title bouts.

Both men are reportedly available to fight in March, with a Ruiz – who stunned Anthony Joshua to take the Brit’s four heavyweight titles on June 1 2019 – clash set to take place in Las Vegas.

However, a meeting with Helenius could also be enticing as it would be held in Manchester.

Neither bout would be for the WBC title given that Whyte remains in pole position to meet with Fury for the belt.

The Gypsy King is also reportedly eyeing a double-header with Joshua in 2022, as the two rivals have been agonisingly close to finally meeting in the ring on several occasions.

They were verbally sparring for years about the prospect of a mammoth event and they came close to penning a deal to face off and name the undisputed heavyweight champion of the world. However, Wilder won an arbitration hearing to secure a third bout with Fury while Joshua turned to Oleksandr Usyk.

The Ukrainian is now the WBA, IBF, WBO and IBO champion and he could face Fury in an undisputed clash in 2022 should he defeat Joshua in their anticipated rematch.