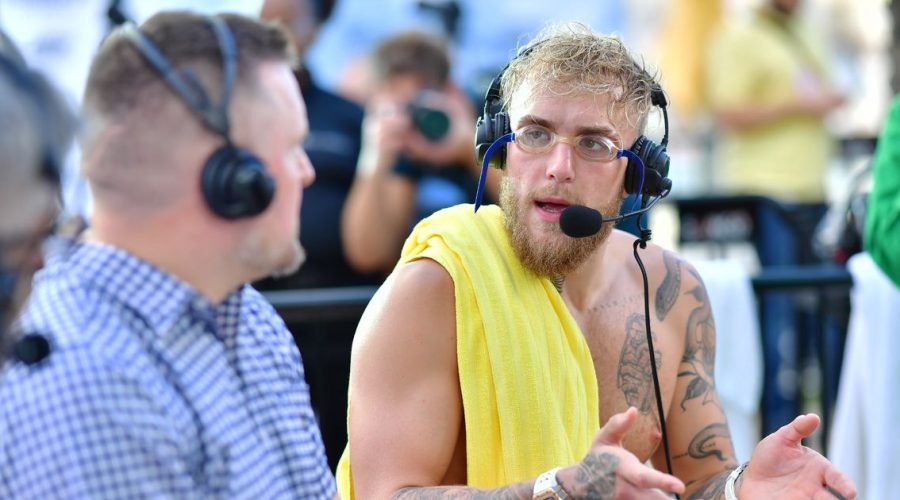 Jake Paul is not thinking about Tommy Fury at all according to his trainer after the British star withdrew from their boxing showdown last month.

The YouTube star is plotting his next opponent after defeating former UFC champion Tyron Woodley for a second time with a brutal KO.

Fury was set to face rival Paul in the ring on that date but withdrew with a chest infection and broken rib which has left him as an outcast in Paul's thinking for his next exploit.

Paul's trainer BJ Flores has admitted that he and his fighter "weren't surprised" by Fury's late notice pull-out but refused to ruin his own schedule and holiday plans by delaying the meeting further.

"Yeah he fumbled, I don't even think Tommy Fury is in Jake's mind right now," Flores told The Schmo. "We all thought at the time that we would be surprised if this fight comes off.

"Even after the contracts were signed and even after Tommy was talking we were working so hard for a gameplan for Tommy and when they said two weeks before we weren't surprised.

"We talked about a couple of options but Nakisa (Bidarian) and Jake decided to have that rematch with Tyron as he deserves his holiday and time off and we didn't want to push it back and not allow him to fight.

"It's the worst feeling in the world so I don't think Tommy is in Jake's mind at all right now, Tommy should go and do his own pay-per-view so we can see the numbers analyse them and go from there."

Paul was set to finally meet Fury after the pair had trolled each other on social media and in-person after the pair's appearance on a card in Cleveland in August.

Fury is now desperate to reschedule the event with Paul after his misfortune but the American is refusing to commit to any new plans.

Should Jake Paul reschedule his clash with Tommy Fury? Let us know in the comments section below

However the YouTube star is exploring other options including further crossover bouts with Conor McGregor and Jorge Masvidal in addition to a tilt with Julio Cesar Chavez Jr.

Any meeting would have been the biggest test of either fighters' short careers but the build-up was largely dominated by Paul's interaction with Fury's father John and brother Tyson.

Paul has now admitted he is more likely to fight the famous pairing than Fury in his career after missing out on his chance late last year.

"He wants the payday but I've said it before that I don't wanna take the fight with him, he doesn't deserve it. I'd rather fight Tyson," he ' The Volume ' with Chris Mannix.

"I would want Tyson to come down to cruiserweight and that would be a bigger fight, or his dad. His dad John did a better job of promoting the fight than Tommy did.

"So I'll fight his brother or his dad before I fight Tommy."

January 10, 2022 Boxing Comments Off on Tommy Fury is “not in Jake Paul’s mind at all” amid fight rescheduling talks
NFL News