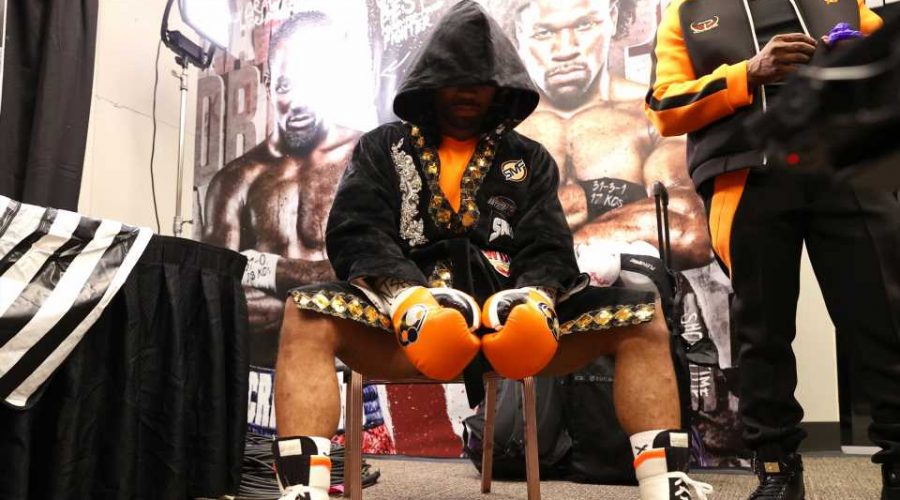 LAS VEGAS — Shawn Porter stunned the boxing world when he announced his retirement following his stoppage loss to Terence Crawford.

“I’m prepared to retire. I was prepared to announce my retirement tonight, win, lose or draw,” Porter said at the post-fight news conference following his heartbreaking loss. But he revealed that the end was inevitable. “Even if it was a draw they were telling us the date we would have to do it again. I was not going to do it again. I’m announcing my retirement right now.”

Whether it will hold remains to be seen as most boxers have a difficult time staying away from the sport they love. But, sometimes, the brutal pugilistic sport doesn’t love them back. And instead of waiting for his carriage to turn into a pumpkin, the 34-year-old believes that he’s given more than enough to the sport and now it’s time to give all of that energy to his family.

Over the course of a boxing career that spanned over 13 years and will end at 36 fights, Porter has amassed a resume that he should certainly be proud of.

Unlike most fighters in this day and age, “Showtime” never had an interest in politics or frowned upon high-risk situations. Instead, he embraced it. He literally fought everyone that the weight class had to offer and left it all in the ring. There was never a fight that he wasn’t in. Even against Crawford, he kept the fight close before his father decided to throw in the towel.

Fighters say they want a resume like Porter but they rarely act on it. A two-time world champion, Porter sought the toughest opponents in their respective primes.  Kell Brook, Danny Garcia, Keith Thurman, Errol Spence Jr, Yordenis Ugas and Terence Crawford all stood opposite Porter. All were forced to fight Porter’s style of fight that saw them deal with relentless pressure and aggression. He won some, he lost some. But he fought them all.

And now it’s time to go. Because what is left for him to do? The idea that he left it all in the ring was fulfilled and fighting without purpose could leave him open to injury. As a family man with a nice chunk of change in his bank account, Porter has no interest in being anyone’s stepping stone

“I gave this sport a great deal,” he said. “From the training to the competition to the more training. And with that being said, after fighting everybody at the top, what more do you do? I’m not going to be a gatekeeper.

“You look at the four losses and assume ‘He could be a gatekeeper.’ That’s not the life I wanna live. I’ve never wanted to live the life of a fighter who fought into his forties … We wanted to end this when we were 30. And I’m 34, and now’s the time.”

He’s right. Boxers often don’t know when to leave until it’s too late. And unlike other sports, being too late often leads to irreversible damage. In Porter’s case, he’ll leave with all of his faculties intact. Sure, he could chase rematches with Spence, Crawford and Thurman but the road to get that back is beyond his control. Fans want to see him continue to give it all in the ring, but we aren’t the ones who spend time away from the family with grueling training camps nor are we the ones taking those punches to the face.

“One of the guys I admire in this sport is (retired Hall of Famer) Andre Ward. I really admire him and everything he’s been to this sport,” Porter said. “And we were in the back room about to do (the) Tyson Fury vs. Deontay Wilder fight and someone comes up to him with all of the talk about Ward possibly fighting Canelo (Alvarez) and they were like, ‘Come on champ, we know you got one more left in you.’

How he’ll be remembered is as one of the most beloved figures in the sport whose jovial personality and infectious smile outside of the ring didn’t match the scowl and intensely competitive nature he demonstrated inside. Truly one of the good guys in boxing, there aren’t any troubling stories of him. Instead, he’s known as a man who loves his father, wife and two children. Almost impossible to dislike, Porter has a future in commentary as he’s cut his teeth on the desk over the past few years. Ask his opponents, all respect him. None dislike him. He doesn’t do anything that would garner that kind of criticism.

They say that nice guys finish last but that’s absolutely not the case for Shawn Porter.

And when it comes to fighting, there was never a fight he didn’t like. If you desired to throw hands with Porter, he would greet you with clenched fists coming right back. Always entertaining and never looking for the easy way out, the former IBF and WBC welterweight champion has had an extraordinary career that will be respected by his peers and fans alike.

In the sport of boxing, it’s always better to leave on your own terms. Just like how he fights, Shawn Porter does things on his own terms and the world has to adjust.

November 22, 2021 Boxing Comments Off on Shawn Porter: A boxing legacy defined by adoration, fearlessness and doing things on his own terms
NFL News