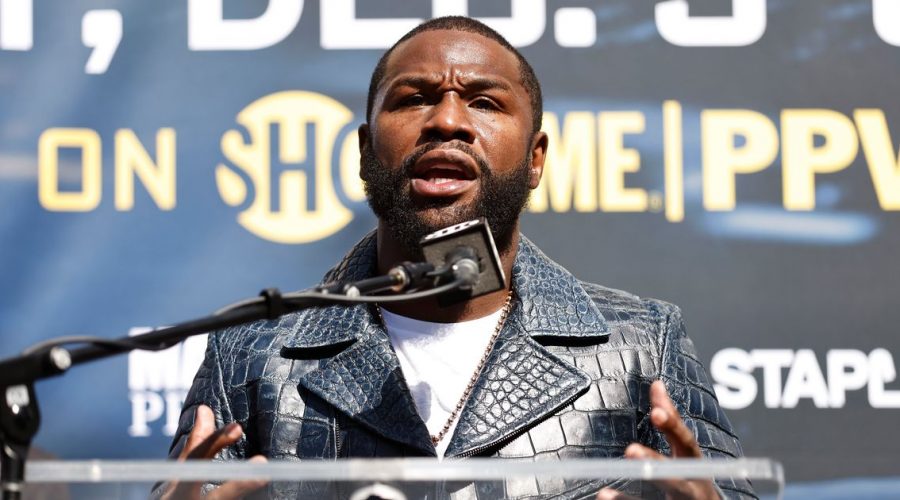 Floyd Mayweather and internet sensation Money Kicks are on the brink of completing negotiations for a bizarre exhibition boxing bout on a helipad.

Mayweather, 44, seemingly retired from the sport in September 2015 after out-pointing Mexican Andre Berto, taking his professional record to 49-0.

He returned seven months later to defeat Conor McGregor though, and has since held exhibition contests with Japanese star Nasukawa and Logan Paul.

After his contest with Paul, which went the full eight rounds, 'The Money Man' vowed to end his days in the ring. However, the prospect of fighting 210 metres above sea level against another YouTuber has tempted him into yet another comeback.

Money Kicks, whose real name is Rashed Belhasa, emerged as an unlikely opponent, and now the 20-year-old star has claimed the pair are on the brink of signing a lucrative deal.

"I never thought I would ever fight Floyd. He is the best fighter ever," he told Sky Sports.

"When I was young, I would collect his 'The Money Team' caps. Mayweather's team asked my team for a meeting. We thought: 'No way will this happen!'

"The same day of the meeting, I saw Mayweather saying, 'I would love to fight Rashed'.

"He is serious. It is an honour that he has called me out. I thought: 'This will go viral!'"

The event is provisionally scheduled to take place in February on Burj Al Arab Jumeirah's helipad in Dubai, situated near the top of the 1,053 foot tower that was built on a man-made island.

And this won't be the first time the tower has served as a sporting venue, having previously been used for tennis, a car race track, and the scene of a new world record as the highest ever jumping point in kite surfing.

Is Money Kicks v Mayweather a fantastic prospect or a farce? Let us know in the comments section.

Money Kicks, who has two million followers on Instagram and 2.6 million subscribers to his YouTube channel, has twice fought in exhibition bouts but has no pro-boxing experience.

However, he revealed that he's already been taking tips off Paul on how to handle a man many consider to be the best pound-for-pound boxer of all time.

"Logan made history," he said.

"The whole world was talking about their fight. He has already given me tips on how to fight Mayweather.

"He told me to flinch a lot, and to move a lot, because Mayweather is a fast guy who has experience."

He added he wouldn't sleep "for a year" if he managed to knock out the boxing legend.

January 11, 2022 Boxing Comments Off on Mayweather in ‘final stages’ of plan to fight YouTuber on helipad 210m above sea
NFL News