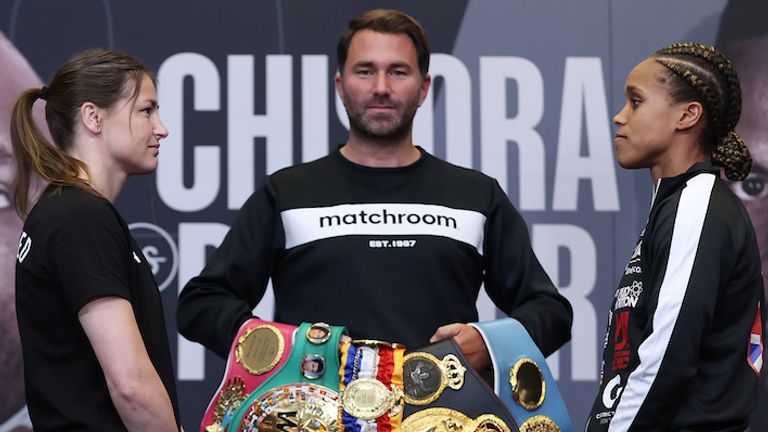 Natasha Jonas has warned Katie Taylor that she has “the power” to inflict a shock knockout and “one punch” can change their undisputed world title fight.

The Liverpudlian challenges Taylor for the undisputed world lightweight titles on Saturday’s Chisora vs Parker bill, live on Sky Sports Box Office, in a repeat of their epic encounter at the London 2012 Olympic Games.

Jonas hurt Terri Harper before last summer’s world title clash ended in a draw, but she insists Taylor will not be allowed to recover if the Irish star is troubled this weekend. “Every time I’m asked to step up, I do. I’m always the underdog,” said Jonas.

“One punch changes everything. I do believe that I have power. I have the power [to KO Taylor].

“If I get an opportunity, it will be the end of the fight.”

Jonas has been planning to dethrone Taylor with her trainer Joe Gallagher, who believes the two-weight world champion has shown signs of vulnerability.

“This will have been the hardest training camp Katie has ever had,” said Gallagher.

“They know the threat. Katie knows.

“Everybody thought Katie lost in New York. The rematch with Delfine Persoon was closer than people say. She has had a lot of hard fights.

“She got buzzed by Persoon and by Christina Linardatou.”

But Taylor and her trainer Ross Enamait pointed to recent performances as proof that she is not on the decline.

“This is a completely different fight [from London 2012],” said Taylor.

“My last few performances, I’ve shown my best. They were my best three performances as a pro.

“I get better each time.”