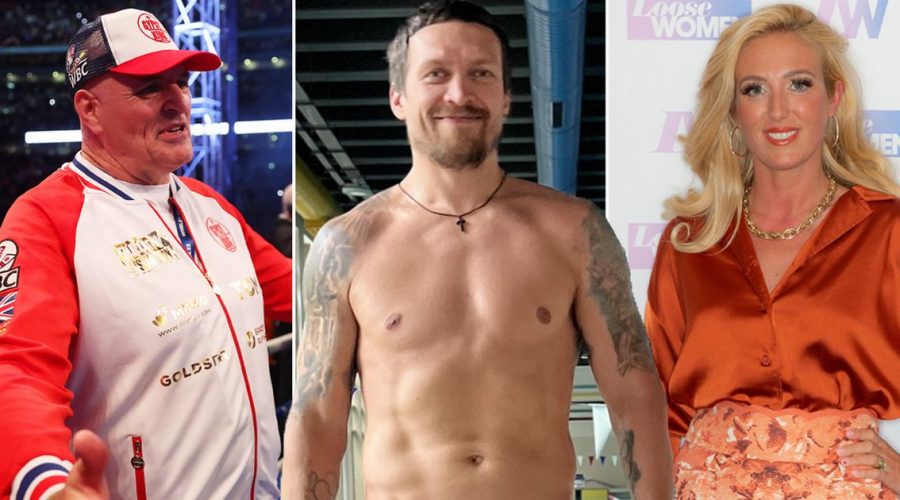 Tyson Fury and Usyk are poised to fight in a heavily-anticipated heavyweight unification bout early this year. The fight is yet to be official confirmed with promoter Bob Arum insisting that deciding a venue is the only thing delaying an announcement.

WBA, IBF WBO and IBO heavyweight world champion Usyk, who beat Anthony Joshua last year, has hit the gym in preparation for the contest. The Ukrainian posted a picture of himself next to a swimming pool and appeared to fat shame Fury by nicknaming him "belly".

The Gypsy King has been taunting Usyk in recent months, referring to the Ukrainian as 'middleweight' in a dig at his slight frame. Fury Sr has now joined the argument stating that Usyk's toned physique would be more suited to fight Tyson's wife Paris.

“Looking at Usyk getting out the pool the other day, he needs to do something different physically to get in the ring with Tyson," Fury Sr told talkSPORT via Freebets.com. “We could put the boxing gloves on Paris and let her fight him based on how he looked the other day. They are about the same size. I think Paris has a bigger pair of shoulders, to be fair.

“He did himself no favours with a body like that. He looked terrible, like he’s not eaten for three months. When they are out of so-called ‘training’ their body disappears. And then you see them transformed a few months later. Like a head transplant onto another body. He will go from a rabbit to an oversized rabbit in a few months."

Will Tyson Fury beat Oleksandr Usyk? Let us know your thoughts in the comments section

Usyk began his career as a cruiserweight winning several world titles before moving up to the heavyweight division. Many fans believe that Fury's size advantage will prove too much for Usyk, despite the Ukrainian having little trouble beating bulky Joshua in back-to-back fights.

Fury holds the WBC world heavyweight crown and has an unbeaten heavyweight record of 33-0. Usyk was at Fury's last fight against Derek Chisora with the pair going face-to-face afterwards. Fury Sr believes his son will beat Usyk and become the unified world champion.

“Tyson is unbeatable," added Fury Sr. "The Gypsy King has won all over the world. He beat one Ukrainian dosser, he will beat another.”

January 21, 2023 Boxing Comments Off on John Fury compares Usyk to Tyson’s wife Paris as he blasts his physique
NFL News