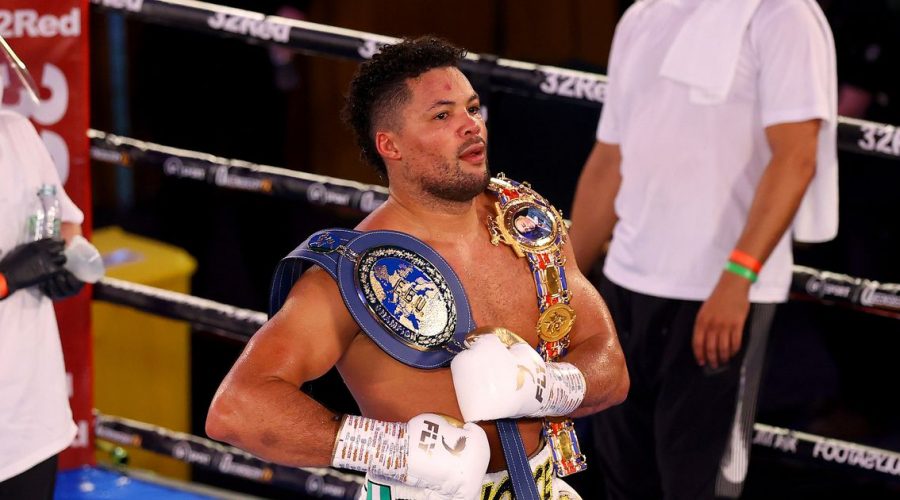 Joe Joyce hopes a victory over Carlos Takam next month will catapult him closer to a world title fight than a rematch with Daniel Dubois.

Frank Warren is keen for Joyce and Dubois to go again after their November clash, which Joyce won.

The promoter, who looks after both fighters, even feels a second meeting between the two could be a stadium fight.

But after missing out on a battle with Oleksandr Usyk this summer, one which would have seen him become mandatory challenger to Anthony Joshua ’s WBO heavyweight belt if he’d won, Joyce would rather take what he sees as a forward step in his bid to carve out a world title shot.

He said: “I’ve handled Daniel and I’d like to move on to bigger and better.

“I don’t know… if it makes sense then it’s an option.

“I would have liked to fight Usyk for the interim with the WBO but, there you go, the journey continues.

“Obviously, it was all lining up nicely with Usyk but Deontay Wilder jumped out of nowhere and messed things up.

“But it’s just a change, I’m going to have to take a different route to the world title and now I’m just focused on Takam.”

Joyce, 35, will meet the 40-year-old Frenchman at Wembley Arena on July 24 after Deontay Wilder's trilogy fight with Tyson Fury was ordered.

That meant Anthony Joshua's fight with Fury was postponed, with Big Josh signing to face Usyk.

Joyce added: “It’s going to be a tough fight.

“Takam always comes in great shape and he’s an experienced fighter, so it’s going to be a great fight.

“He likes a bit of a brawl, he’s a strong guy, experienced.

“I’m obviously taller but he has a long reach as well so it will be a good fight.”

By the time Joyce eventually does get his shot at a world title, he could even be an Olympic gold medallist.

That’s because the International Boxing Association has ordered an investigation into possible corruption in the boxing at the Rio Games in 2016, at which he took super-heavyweight silver.

He lost in a controversial final to another Frenchman, Tony Yoka, and Richard McClaren, who will lead the investigation, will likely look into their clash.

Joyce said: “It’s very interesting that they’re looking at it now and I just have to hope for the best.

“It would be nice to be awarded the gold medal.

“I’ve always felt I deserved it, especially if you look at the stats — punch output, punches landed etc.

“I thought I’d done enough but sometimes in boxing these kind of things of happen.

“It’d be amazing to have the gold medal and especially with this being the year the next Olympics is finally going to happen after these lockdowns.

"It’s just great that they are looking into it.”