Tim Tszyu, like the rest of the boxing world, tuned into Brian Castano’s defeat of Patrick Teixeira to claim the WBO junior middleweight title last month.

Not that he was overly impressed with what he witnessed. 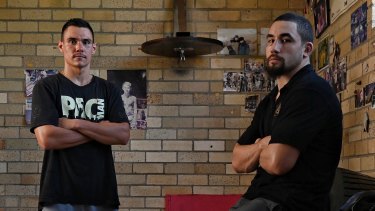 Tim Tszyu and sparring partner Rob Whittaker believe they are both on track for world titles.Credit:SMH

“That strap should be with me. That strap is mine,” Tszyu said. “I beat both. Look, they are tough boys; strong and fit, they are world calibre. They are good boys but I need my shot and hopefully I get it soon.

“I’ll prove to them that I’m the best in the world.”

Tszyu would have already had his shot at the world title if Teixeira wasn’t able to put it on the line against Castano due to the pandemic. Instead, the Australian will fight countryman Dennis Hogan at the Newcastle Entertainment Centre on March 31, with the winner earning the right to take on the champion. 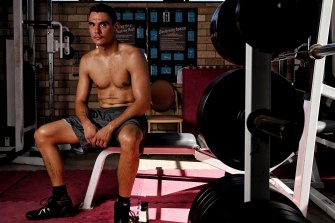 “I know the world title is one fight away. I’m rated No.1 in the world and that just means there’s one guy in front of me.

“[Hogan] is going to be tricky but he doesn’t pose a threat. That’s all I can say.

“He will be awkward at first, I’ll need to slow him down and then we’ll see how he reacts when he gets hit flush in the face.”

To prepare for the upcoming bouts, Tszyu has been sparring with former UFC champion Robert Whittaker. Their second session, over five rounds, took place at Tszyu’s gym in Rockdale on Tuesday.

“We’re the two top combat athletes in Australia, so we’re working with each other and helping us both pursue our goals, for him to become the UFC champ and for me to become the world champ in boxing,” Tszyu said. “It would be a great story.

“It was back and forth, I pushed him and he pushed me. It wasn’t hugging, it was punching.”

Whittaker, who has a weight advantage of at least 15 kilograms over Tszyu, was impressed with the form of his sparring opponent in a session that was closed to the press.

“I do believe iron sharpens iron so to get in there with his speed and his reactions and his presence in the ring, it’s great to work my eyes and reaction speeds and muscle memory for myself,” Whittaker said.

“He’s so quick. So quick. He just fills the space so well. It’s certainly good work for myself.

“I’m getting rounds with him as well.”

Whittaker, who is scheduled to take on Brazilian middleweight Paulo Costa in a UFC bout on April 19, hasn’t ruled out a boxing bout against former footballer Paul Gallen in the future.

“It’s funny because a lot of people bring up Gallen and me potentially fighting him,” Whittaker said.

“I’m already in the fight game, it’s not like I need to drag my feet to do it.

“If the money’s right, I’ll do it. If it’s not, I’ll just keep doing my day job, which is fighting, funnily enough.

“We couldn’t get things organised fast enough before I took a fight with the UFC this time. So maybe opportunities will present themselves afterwards but we’ll have to wait and see.

Asked if he respected Gallen as a boxer, Whittaker said: “Certainly, I respect anyone that gets out there and works hard and does what they enjoy doing and dreams big.

“I would never not respect hard work and effort.”