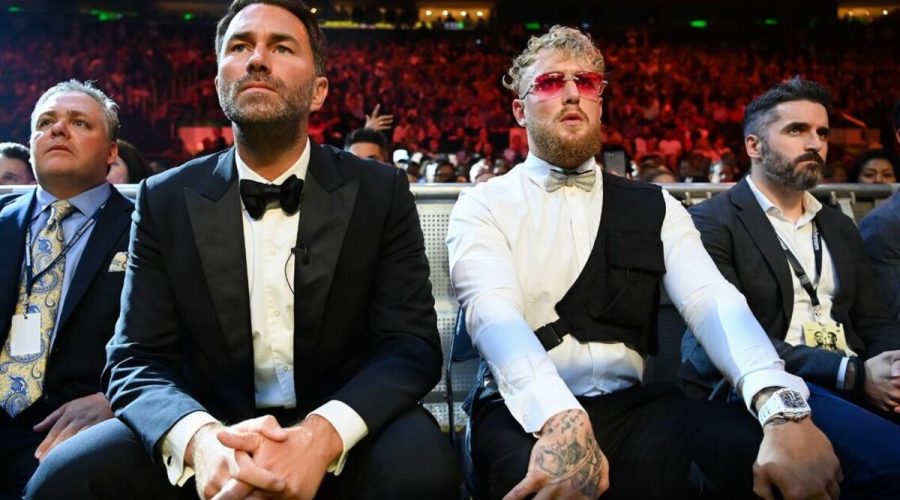 Eddie Hearn believes Jake Paul would get knocked out by the worst fighter on his roster. The British promoter says that The Problem Child “doesn’t understand the fundamentals of boxing” but can “punch a little bit” and is ‘athletic’.

Since making the transition to boxing in 2018, Paul has won six professional fights and one white-collar bout from seven contests and is widely considered to be the best boxer in the influencer sphere. However, the YouTube star raised a few eyebrows by claiming that he can beat former pound-for-pound king Canelo Alvarez despite mostly fighting retired MMA fighters for the majority of his career so far.

Hearn – who recently sued Paul for defamation – believes he is an ‘average fighter’ and gave the ex-Disney actor a serious reality check during a recent appearance on Spencer Matthews’ new podcast Big Fish.

When asked how Paul would fare against the worst fighter on the Matchroom Boxing roster, Hearn replied: “He’d get knocked out. I mean, he’s not bad. Like I said, I fell out with Jake because I said, ‘you’re an average fighter’. But he thinks he could be Canelo Alvarez, like genuinely. And being an average fighter, like that’s not… like he’d beat me.

“I had a couple of amateur fights, pretty terrible, but he would probably knock me out in a couple of rounds. So, I’m just saying that on a comparison of the global scale of professional fighters, you are very average.

“And he really didn’t like that. But you know, the guys that we represent, would murder him because they’re real fighters. You can’t pick up boxing at 26/ 27 and go, ‘I’m gonna go and rule the world’. These kids have been fighting since they were six or seven years old.

Joshua given renewed hope of world title shot versus Wilder

Mayweather commended for giving Deji ‘touch of reality’ after stoppage

“You know, he doesn’t understand the fundamentals of boxing really. But he can punch a little bit. He’s very athletic, he’s quite strong. But there’s much more to it than that.”

Paul’s next fight is yet to be confirmed although attempts have been made to make the long-awaited grudge match with Tommy Fury for a third time. The fight is set to take place in the United Kingdom next February but according to Fury, negotiations have stalled over the last couple of days.

November 23, 2022 Boxing Comments Off on Hearn claims Paul would get KO’d by ‘worst fighter on his roster’
NFL News