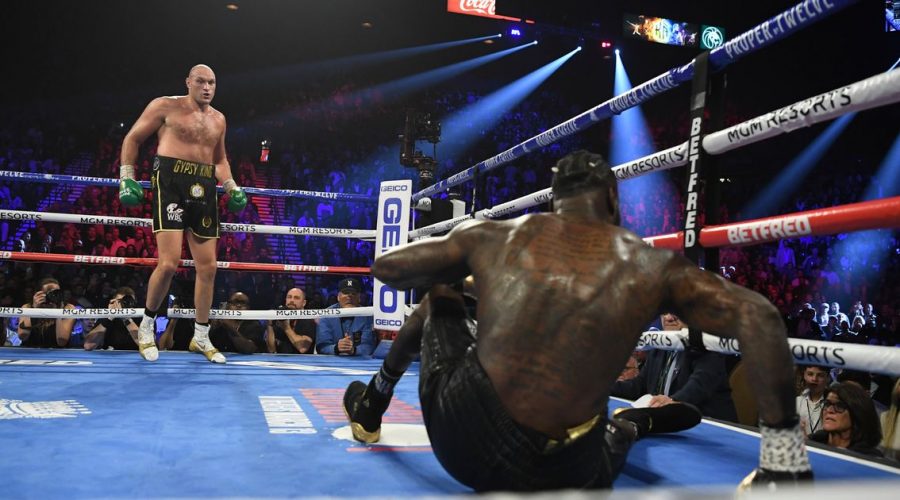 It was just gone 1am in the early hours of Sunday morning when Tyson Fury and 50 people rolled into one of Las Vegas' most luxurious nightclubs.

Deontay Wilder had promised to invite the Gypsy King to his post-fight party if he had his hand raised. But Fury didn't need to be on anyone's guest list. This was his night.

Just a few hours earlier, he had delivered a pulsating performance to demolish the American and rip the WBC heavyweight crown from his grasp.

It was such an emphatic display that even Mike Tyson – the man Fury was named after – stood up in a rocking MGM Grand Garden Arena and roared “wow”.

The very same venue was turned into a boxing mecca by Tyson. Now he was watching on as the man with the same name made it his home as thousands of British fans cheered him on.

Then it was on to a nightclub in the same hotel which Fury took over in the early hours.

Adorned in a bizarre outfit of a suit with his face plastered all over it, no shirt and a green tie given to him by the WBC, Fury arrived to a welcome fit for a royalty.

Waitresses adorned in boxing gloves and robes with signs declaring the “King had returned”. Fury's road to redemption secured. Back on the throne as the No 1 heavyweight in the world. And he partied like he was on top of the world.

With a Union Jack draped around his shoulders, he entered the DJ booth with legendary DJ Steve Aoki and led the choir of hundreds of punter so on the floor as Neil Diamond's Sweet Caroline belted out.

There were more than a few puzzled Americans wondering what all the fuss was about and why such a tune was blaring around a venue world famous for EDM.

Grey Goose vodka and Dom Perignon champagne was guzzled by his entourage throughout. Fury had made Vegas his town for that night.

He hasn't been seen in a ring since and – like most people around the world – a nightclub either thanks to the Covid-19 outbreak.

It is 12 months to the day since that night against Wilder when the self-proclaimed Gypsy King put on a masterful and ruthless performance.

Nobody thought it would be possible that Fury would go at the American, who had the most feared right hand in the division.

But he did so in stunning fashion to brutally break down the Bronze Bomber and silence doubters about his status as the true heavyweight world champion.

It felt like Fury had the world at his feet with only Anthony Joshua left to conquer before being unquestionably the finest heavyweight of his time.

But like a lot of the Manchester man's career, there is still controversy even when he is away from the bright lights. His reputation in the ring is golden, outside there remains questions.

There were the accusations – later retracted – by a Lancashire farmer who claimed to have lied about providing offal meat to Fury's team which was alleged to have been used as a defence in his case with UK Anti-Doping back in 2017.

Then just as news emerged in June that a 50/50 split was agreed for a fight with Joshua, Fury took to social media to thank Daniel Kinahan for allegedly brokering the deal.

Cue a lot more eyeballs going on Kinahan and the serious allegations against his name which have emerged again in a recent BBC Panorama documentary.

Fury has been silent on the matter since.

He was due to return to the ring in December only for talks to break down with various reasons cited.

It has made his claim on social media after Josh Warrington's shock defeat by Mauricio Lara last weekend that the Leeds man was a “victim of inactivity” quite more bizarre considering he is due to go into a clash with Joshua in June with no warm-up bout.

But this is Fury – nothing is ever straightforward and simple.

Get the latest football news straight into your inbox!

He will still go into the Joshua fight – should it happen this year – as favourite to become the undisputed heavyweight champion.

Since Fury returned to the ring in 2018, all roads have led to a Joshua fight.

Even on this day 12 months ago when he was pummelling Wilder, Fury was sending messages to his British rival.

It had been talked about that week in the build-up to the Fury fight how AJ was enjoying a holiday in the country from where his family's roots are.

Fury opted for a green and white mouthguard with 'Nigeria' scribbled in black marker across it. He knew his rival would be watching from afar.

He may as well have winked down the camera at him.

Fury got Wilder out of the world heavyweight picture that night, even if we expected a third fight between the pair last summer.

Little did we know that an injury to the Alabama man and a worldwide pandemic would help clear the path, too.

Saudi Arabia looks the favourite to host the undisputed clash.

If so there won't be a repeat of Fury's boozy nightclub party should he have his hand raised in victory.

The strict laws on no alcohol in the Middle East nation would put pay to that.

But here we are 12 months on from that remarkable night in the Nevada desert waiting on news about a British battle in an Arabian one.

February 22, 2021 Boxing Comments Off on Fury silenced doubters 12 months ago – and it began whirlwind year out the ring
NFL News