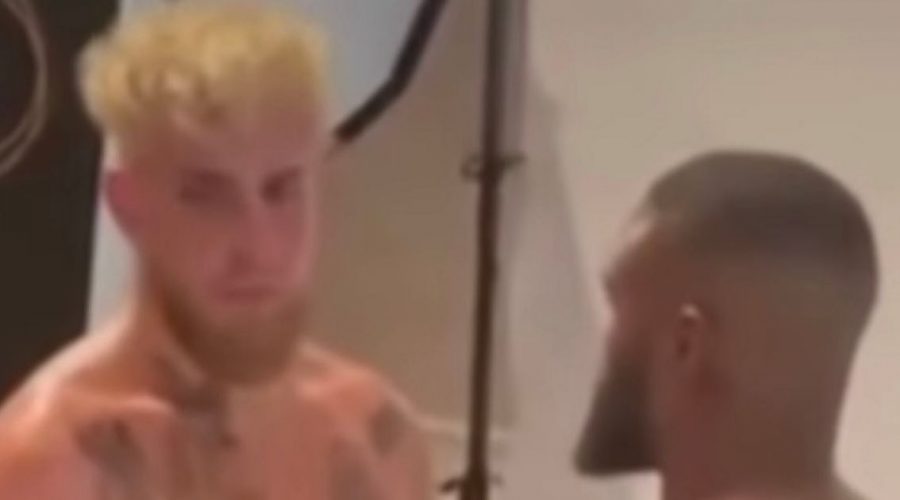 Leaked footage of a face-off between Jake Paul and Tyron Woodley has emerged online, with the YouTube star looking “too scared” to look at his opponent.

The former UFC champion takes on Paul in a bout scheduled for August 28 – a boxing match that’s highly anticipated by fans around the world.

Now, though, Paul looked like he was lacking confidence as he came face-to-face with Woodley.

The 24-year-old, usually cocky and brash, looked less so in his meeting with Woodley. Paul frequently kept glancing away from his opponent, failing to keep his focus and constantly keeps looking at the ground or Woodley background.

Footage of this emerged on the internet, and fans kept pointing out the same, believing Paul was biting more than he could chew by selecting this fight.

Woodley has been in confident mood ahead of the fight – he thinks he can knock Paul out in one round and UFC President Dana White believes him.

Back in April, Woodley tweeted to Paul: “You [are] already scared s***less. I don't have to slap you. But the moment I walk away after I knock you out….the world will rejoice!”

Some, however, believe this is all just a publicity stunt and Woodley will throw the fight for a lumpsum earning.

UFC Welterweight champion Colby Covington is one of them: "They're doing this on purpose, and I really think Tyron is going out there to take a dive."

"I think he's broke, he needs the money, he's got mouths to feed, he's got a lot of alimony pay cheques to pay.

“So I think he's just going to go out there and take a dive.

Do you think Jake Paul is ready for his fight against Tyron Woodley? Let us know in the comments below.

"It's going to be a circus, and we know boxing is the most corrupt sport in the world as it is.

So this little side circus they're doing with Jake Paul, of course they're going to favour his way to make it a work."

Paul’s brother, Logan, recently faced Floyd Mayweather in a bout that ended with no winner.

Fans criticised the conservatism of the fight, but Jake believed it was Logan’s win, claiming his brother ended Mayweather’s 50-0 record.