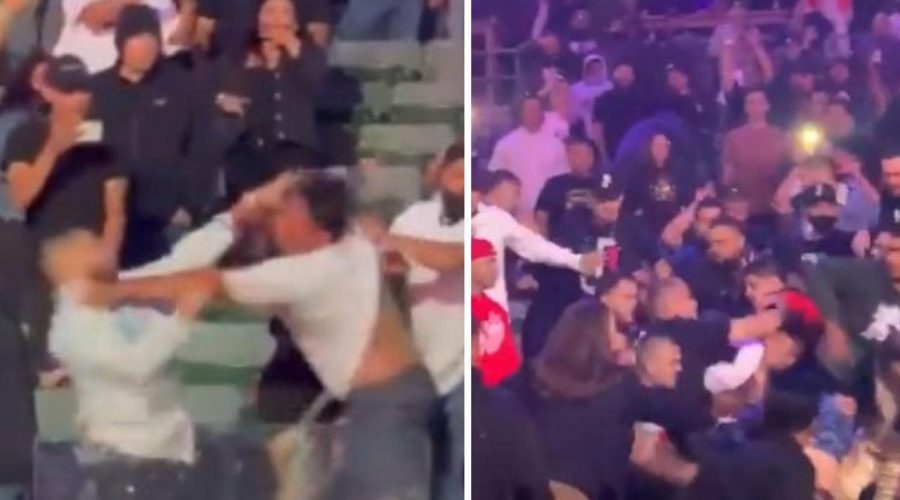 Andy Ruiz Jr is back in the winners circle for the first time since he won the WBA, WBO and IBO world championships, defeating Chris Arreola in California.

Ruiz stunned the boxing world when he knocked out Anthony Joshua at Madison Square Garden in 2019.

While he lost the follow up, it was highly anticipated return for Ruiz as he looks to get another shot at being a world champion.

But while it was a war in the ring, there was just as much action in the stands, which threatened over overshadow the main event.

Andy Ruiz bounced back for a win.Source:Getty Images

In the first event held in California since the beginning of the pandemic, there was plenty of energy in the crowd and it led to some wild scenes.

While it was a crowd of just 3940 at the Dignity Health Sports Park, there was no shortage of thrills and spills from the crowd.

Before the main event started, The Athletic’s boxing insider Mike Coppinger shared footage of the wild fights in the stands.

And boxing is back in SoCal! They are slugging it out in the stands!! @barstoolsports#RuizArreolapic.twitter.com/0jFcZPhlaz

Barstool Sports writer Rear Admiral tweeted: “Boxing crowds are loaded with meatheads so I can’t imagine how bad an MMA crowd is.”

Even after the fight, Arreola said he realised something was going on when the crowd was “hooting and hollering”.

“I was like holy s***, there was something going on in the crowd,” he said. “I wasn’t going to stop and watch but I did hear the fans.”

Try as it might, the win couldn’t take the sheen of Ruiz’s return to the winner’s circle, bouncing back from a knockdown in the second round to take a unanimous decision 118-109×2 and 117-110.

After the fight, Ruiz, who outpunched Arreola 161 to 109, was thrilled to bounce back after he lost to Joshua and lost his belts in his last fight.

“When you go down, you just have to climb back up. That’s exactly what I did. I got dropped, but I got up and got the victory,” Ruiz said. “I could have done a lot more. I couldn’t really find my distance, but some of that was Arreola doing a good job. I could have kept my hands up better, but I just need to get back in the gym and stay busy.”

Arreola was complaining that he got better of the punches.Source:Getty Images

But Arreola was furious at the scores after the fight, ripping the judges a new one for the lopsided score.

“I respect the judges, but today, I always said beauty is in the eye of the beholder,” Arreola said. “They like a butterface. Everything’s pretty but their face. Honestly, man, did he win? Fine. But don’t tell me you’re only gonna give me two, three rounds. F*** that! I’m gonna be like Dr. Dre. All y’all can suck my motherf***ing d***!”