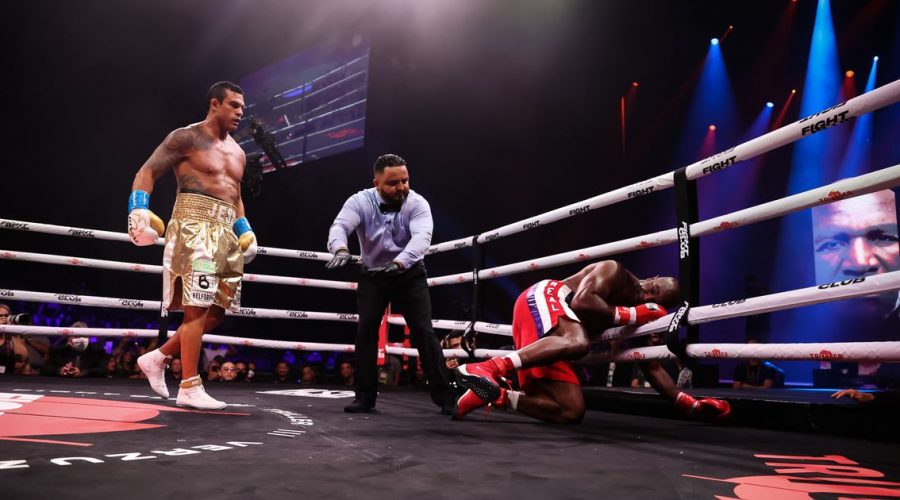 Evander Holyfield's foolish and dangerous attempt to launch a boxing comeback at the age of 58 ended after less than two minutes.

He was soon dropped by the Brazilian and referee Sam Burgos sensibly waved the fight off before any serious harm was done to the former two-weight world champion.

Holyfield, though, was unhappy with the ending, complaining: "I’m not hurt. It’s kind of sad. It is what it is; I think it was a bad call, I think the referee shouldn’t have stopped the fight that quick."

Holyfield had stepped in at a week's notice to replace Oscar De La Hoya whose own comeback was put on hold after he was hospitalised with Covid-19.

He last fought in 2001 when he stopped Brian Nielsen but had made no secret of his desire to return – ideally for a third time against former rival Mike Tyson.

And Holyfield hoped to lure Tyson into a trilogy bout with an impressive performance against Belfort who was 14 years his opponent's junior.

But as soon as Belfort landed, Holyfield staggered backwards before falling through the ropes after a slip.

Belfort did knock down the ring legend seconds later however and the fight was waved off with 10 seconds of the first round remaining.

The former UFC champion then took the opportunity to call out YouTube star Jake Paul for a boxing fight.

Paul has won each of his four professional contests, most recently outpointing Tyron Woodley.

And Belfort made him a money-spinning offer, saying ""We've got $25million; winner takes all! Let's go Jake Paul, stop running from me. He earned my respect, but he's still a Disney kid.

"You better start training, all of your fans are going to be Vitor Belfort fans.m I've got family, you don't have family… America needs me, not you!"

On the undercard, Anderson Silva knocked out fellow UFC legend Tito Oritz inside two minutes of their clash.

Meeting in a boxing ring, Silva followed up his recent win over Julio Cesar Chavez Jr with a stunning stoppage.

The Brazilian played possum in the corner before catching Ortiz's chin with a right hook which sent him to the canvas.

The rivals were due to clash in 2013 but Haye twice pulled out injured, and last night said: "There's one fighter I would come back to professional boxing for and that's Tyson Fury. That big fat dosser; I know I'm his kryptonite, I know what he can't handle.

"My overhand right… which I didn't even show in there tonight, I didn't want to scare him. If I'd have let my right hand go, he wouldn't be taking the fight.

"He thinks it would be an easy fight but's wrong. I know he's ducking Anthony Joshua but he doesn't want that work. We were supposed to fight in 2013 but I was injured but I'm healthy and I'm ready to go."