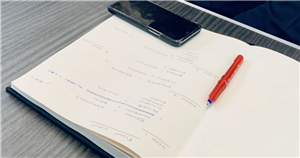 Eddie Hearn has accidentally leaked his plans for Matchroom's summer Fight Camp series after posing for a photo with a fan.

Hearn's promotional company are set to stage a number of fights in the back garden of their Brentwood HQ again this summer, having stumbled upon the idea during last year's coronavirus lockdown.

The full schedule is due to be announced at a press conference on Monday, but a handful of bouts have already been revealed thanks to a blunder from the Matchroom chief.

While on a train down to Newcastle for this weekend's card headlined by lightweight star Lewis Ritson, Hearn posed for a photo with a railway worker and left his summer schedule in sight on the table.

Fans were able to zoom in on the notepad and spot some of the fights in the pipeline this summer, the most interesting of which sees Kid Galahad take on Jazza Dickens for the vacant super-bantamweight world title on week two of his three-week Fight Camp run.

Do you think Conor Benn will go on to win a world title? Let us know in the comments section below.

Other fighters in action at Fight Camp include Campbell Hatton, Anthony Fowler and Jack Cullen.

Florian Marku is scheduled to lock horns with Maxim Prodan, with Shannon Courtenay also due to defend her WBA female bantamweight title in a highly-billed rematch with Rachel Ball.

Heavyweight prospect Johnny Fisher will also be on the card.

Natasha Jonas, who suffered a narrow defeat against undisputed lightweight champion Katie Taylor back in April, is also in line to return on week three.

Fight Camp, which unlike last summer will be staged with fans present, is set to go ahead on July 31, August 7 and August 14 at Matchroom's HQ.

For the meantime, Hearn's attention is on Ritson and his clash with Jeremias Ponce in Newcastle on Saturday.

The Geordie lightweight could secure a mandatory shot at undisputed champion Josh Taylor by claiming victory, having secured a controversial win over Miguel Vazquez last time out.