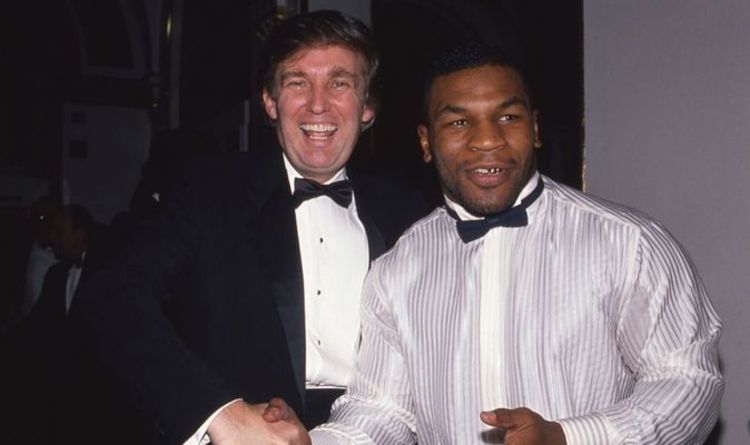 Donald Trump returns to the limelight this weekend as he will join his son, Donald Jr, to provide an alternative commentary on Evander Holyfield’s comeback fight against Vitor Belfort in Florida. The exhibition event, which also features the comeback of British boxing legend David Haye, falls on the 20th anniversary of the 9/11 attacks. The former president was called about by actor Chris Evans over the decision to host the pay-per-view.

He tweeted: “On the 20th anniversary of one of the darkest days in American history, a former president of the United States of America will be… hosting a pay-per-view boxing match in Florida.

“Honestly, how, HOW do the people who support him square this?”

Trump has dabbled in boxing before, and had history with Iron Mike.

He funded Tyson’s 1988 fight with Michael Spinks – where he knocked his opponent out in just 91 seconds.

He also served as an adviser to The Baddest Man on the Planet.

Tim O’Brien is the author of the 2005 book TrumpNation, a biography of the man who would later serve as the 45th President of the United States.

Mr O’Brien wrote that Trump was in his New York office when Tyson stormed in.

“Now, if I froze I’m dead… You would have zero chance.

“Here’s the heavyweight champion of the world, and he’s a solid piece of f***ing armour.” Trump’s answer, however, is not disclosed.

Iron Mike was married to Robin Givens at the time, a short-lived marriage which lasted just over a year from 1987 to 1988.

He is now married to Lakiha Spencer and has been since 2009. The couple have two children together.

Trump, meanwhile, claimed earlier this week that he would knock out his White House successor Joe Biden “in seconds” if the pair had a boxing match.

During the pre-fight press conference, Trump said: “Well, if I had to pick somebody in the world, not only a professional boxer – because I’ll take a pass on the professional boxers, that could be a very dangerous subject.

“I think probably my easiest fight would be Joe Biden because I think he’d go down very, very quickly.

Trump, oozing in his trademark confidence, added: “He once said, ‘Oh, I’d like to take him behind the [gym],’ He’d be in big trouble if he ever did. I think Biden would go down within the first few seconds.”

He finished: “Of all the people in the world that I could fight, that’s probably the one I’d most like to fight.”

The pair’s most crucial fight of all, albeit not a physical one, ended in defeat for Trump when he lost last year’s presidential election by 306 electoral college votes to 232.

While a boxing match between the two seems unlikely, Trump may well end up throwing a few verbal punches tonight. Holyfield, who last entered the ring in 2011, makes his comeback in what has been dubbed “the most anticipated heavyweight fight of the year” by promoters Fite.tv.

He stepped in at just eight days’ notice after Oscar De La Hoya was infected with COVID-19 and had to pull out. Trump will call the entire four-fight card live in person with “no holds barred”.

The pay-per-view costs £9.99 in the UK and is available here.

September 11, 2021 Boxing Comments Off on Donald Trump furiously confronted by Mike Tyson – ‘Are you f***ing my wife?’
NFL News