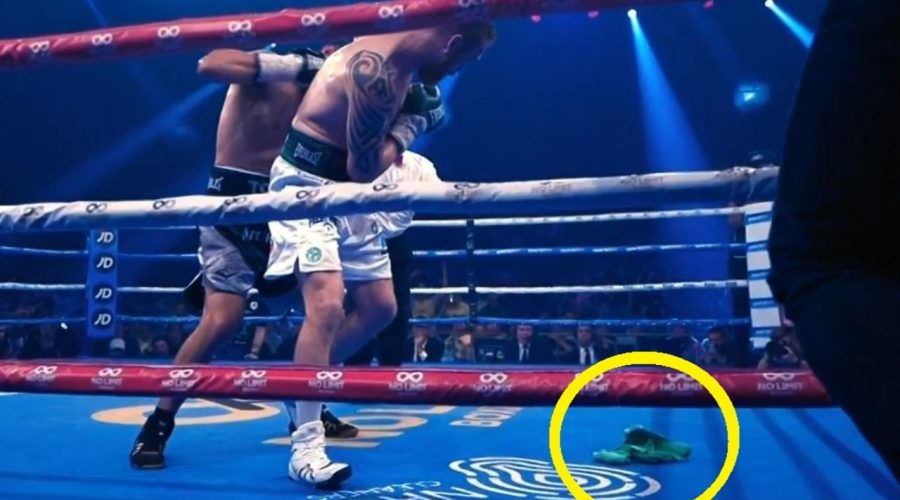 Stephen Edwards has seen up close and personal what it looks like when a fighter cops more punishment than anyone should from Tim Tszyu and he wasn’t going to let that happen to Dennis Hogan.

The Irishman’s trainer threw in the towel during the fifth round of his pupil’s fight against Tszyu in Newcastle on Wednesday night, when it was clear a vicious uppercut and a brutal body barrage had made it impossible for Hogan to carry on.

It was a far different approach to what we saw when Tszyu beat Jeff Horn to a pulp last year. Edwards was in the Queenslander’s corner as hit cutman on that night in Townsville and urged trainer Glenn Rushton to stop the fight, only for Rushton to push Horn to keep going — a decision which he was widely slammed for.

There was to be no repeat as Tszyu crunched his way to an 18th straight win that puts him on the path to a world title shot, and everyone was full of praise for Edwards’ call to get Hogan out of the ring.

“Stephen Edwards did a great job stopping the fight when he did,” Main Event analyst Paul Kent said.

Main Event presenter Warren Smith added: “That was the stoppage that Stephen Edwards was recommending to Glenn Rushton for Jeff Horn up in Townsville last year.

“Glenn Rushton let Jeff Horn go for longer than Stephen Edwards would have liked, and I’m sure he was determined not to make the same mistake for Dennis Hogan.”

Smith revealed the unseen moment Edwards came up to Australian boxing icon Barry Michael off-camera, while Tszyu was conducting his post-fight interview, to seek reassurance he made the right move.

“Stephen Edwards, off-camera, while Tim Tszyu was talking in the ring, came to our commentary position and he was quite emotional,” Smith said. “He said, ‘Barry, please tell me I did the right thing’.

“I’ve got no doubt he did the right thing.”

Michael said: “He was very emotional, as you said, he definitely did the right thing.

“Dennis Hogan, he’d been down, that uppercut nearly took his head off, those body shots were ripping him apart.”

Tszyu’s star continues to rise as he marches on towards a super welterweight world title fight, showing off a new weapon as he attacked Hogan’s body with a terrifying precision that stunned the boxing world

“This is not tic tac, we’re not ballerinas here dancing around. We’re punching each other,” Tszyu said after the fight.

“I’m going to do some serious damage and hurt my opponents.

“In the ring this is my kingdom, and this is where I take control.

“I could see it (Hogan wilting from body shots) from round two. I was warming up only. I could go another seven more rounds of this pace or even more.”