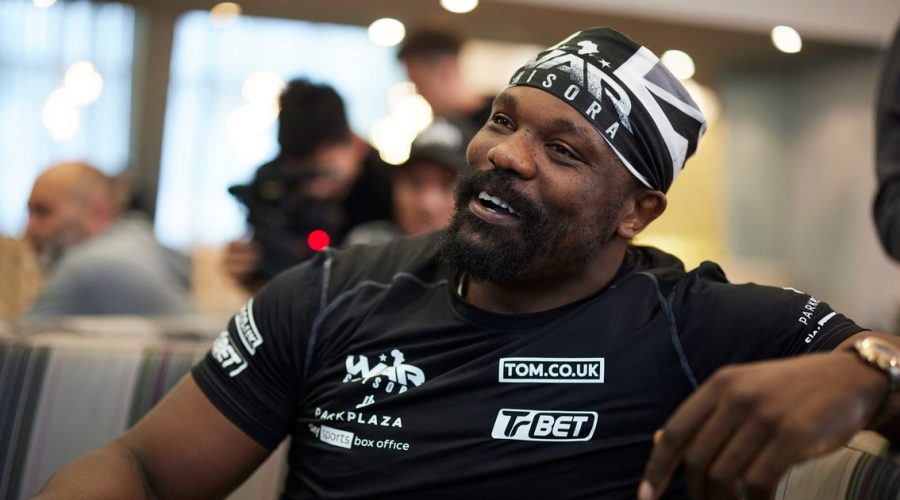 Derek Chisora must draw Joseph Parker into a battle and fight like a "19 stone Arturo Gatti" if he is to win Saturday's crunch bout, British boxing legend David Haye says.

The two will finally face off at the Manchester Arena from around 10pm UK time.

The fight, to be shown on SkySports Box Office, comes after the duo were originally scheduled to fight in 2019 before it was cancelled after Parker was bitten by a spider.

Haye, a former cruiserweight and heavyweight world champion, told us: "He's bought in Buddy McGirt, the hall of fame American trainer who's had amazing nights with guys like Arturo Gatti, these crazy fights, so hopefully we're going to get a 19 stone Gatti out there!

"There's going to be a lot of action, that's what everybody wants, that's why people tune into the marquee division for the punches to fly, and that's what Derek's done consistently year after year."

He added: "I think if Derek can get past Joseph Parker's jab, if he is able to drag Parker into the battle zone, where I believe Derek Chisora does his best work, then I think we've got ourselves an absolute barnstormer of a fight.

"If Derek isn't able to get past is jab and is kept on the outside, then he's got himself a very long, tough night.

"It's going to be tough no matter how you try and beat Parker, but there's an easier way to do it and a hard way, and Derek's got to find the easier way which is bring Parker into his world, which is blood and guts, when things get real dark, real tough in there.

Haye continued: "He's going to need to do better than anything he's done before, this is how tough this fight realistically is, we know this is the fight that Chisora has to get right, because against someone like Parker, you don't get it right you're going to get it very, very wrong.

"This is the toughest fight, for Derek at an age of 37 years old, he's going to need to really get it super right."

The late Gatti is widely considered one of the most exciting fighters of all time, known for his brave front-foot style in classics including his epic trilogy with Micky Ward.

Haye hung up his gloves in 2018 after one of the most exciting careers in British boxing history.

Last year, he launched the Black Mask Company, supplying durable and comfortable masks from Vietnam to the UK with Formula One supremo Lewis Hamilton among fans.

He told us: "It came about last year, a pal of mine from Vietnam told me to get myself a mask because of this Covid thing, and at that stage at the beginning of the year no one actually heard of Covid.

"So I tried to find a washable mask online and it was impossible, none were available, every website was sold out and there was a long waiting list so I asked him to send me some of these Vietnam ones over.

"They have been wearing masks for a long time, it's part of their culture now, since SARS, bird flu etc.

"So after 20 years they've had washable masks, different layer masks, they've been there and done it over the years, so I assumed they'd know about masks.

"Effectively what I ended up doing is getting masks that the government made for themselves, washable masks, and then managed to get the worldwide distribution of the masks that were made by the Vietnamese government.

"It's only a small factory that make these masks but we managed to bring them over to the UK and as a result people really seem to have taken to them, Lewis Hamilton wore one at the opening of Silverstone.

"You can wear them on the beach, in super high temperatures, in rainy season, they're super durable. They weren't made for retail they were made for the police, and protective services so they're super comfortable."

The Black Mask Company, founded by David Haye, launches a rainbow mask to thank our NHS heroes. 25% of the retail price will be donated to NHS Charities Together. Get yours at www.theblackmaskcompany.com/products/rainbow-mask